A fundamental question in biology is how the diverse cell types observed in a multicellular organism are encoded by a single genome sequence, and which genome regulatory mechanisms orchestrate the deployment and maintenance of cell type-specific transcriptional programs. However, the diversity and evolutionary dynamics of cell type programs remains almost unexplored beyond selected tissues in a few species. Similarly, little is known about the emergence of complex genome regulatory mechanisms that support cell type-specific programs and cellular memory, for example genome spatial compartmentalization and repressive chromatin modifications.

In recent years, the development of advanced functional genomics technologies has revolutionized the study of cell type and genome regulation, even at single-cell resolution. This opens the way to the comparative analysis of genome regulation in species that represent diverse levels of biological complexity: ranging from unicellular temporal differentiation and simple multicellular behaviours (e.g. in some protistan eukaryotes), through loosely integrated and limitedly diversified ensembles of cell types (e.g. in early-branching animals), to organisms with elaborate tissue and bodyplan organization (e.g in bilaterian animals). 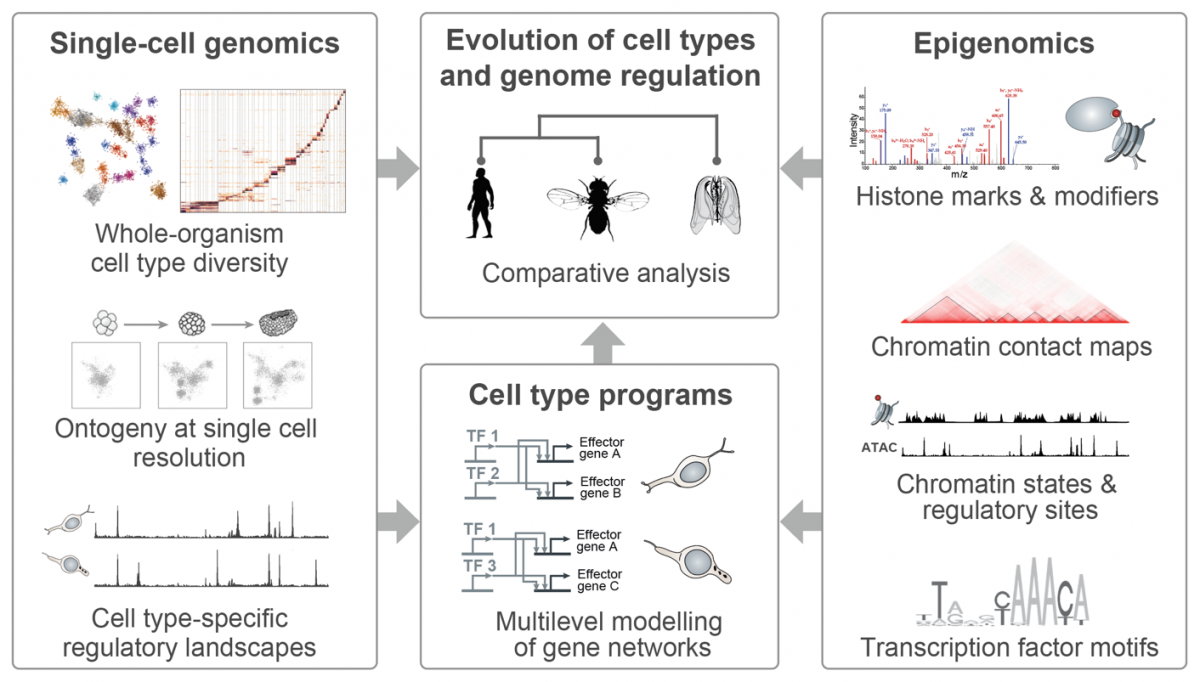 In our group, we combine high-throughput epigenomics and single-cell genomics technologies with advanced computational methods in order to dissect cell type programs and genome regulatory architectures in phylogenetically diverse systems. The comparative analysis of these data allows us (i) to trace the evolution of cell types and genome regulatory mechanisms; (ii) to identify shared principles in genome function; and (iii) to reconstruct regulatory innovations linked to major transitions such as the origin of eukaryotic cells or the emergence of multicellular organisms.

Cell types are the basic building blocks of multicellular animals. Traditional studies based on microscopy and spatial gene expression profiling (by in situ hybridization) have provided important insights into the evolution of specific cell types in different lineages. However, these approaches require a priori selection of gene markers; they are difficult to scale towards multiple expressed genes simultaneously; and they are not readily applicable to all species or life stages, in particular adult specimens. As a consequence, we lack a systematic and unbiased understanding of the diversity and evolution of animal cell types.

In this research line, we apply and develop single-cell transcriptomics tools to unbiasedly characterize and compare cell types in whole-adult organisms and embryonic stages of diverse animal lineages.

The implementation of cell type-specific transcriptional programs is controlled by gene regulatory networks (GRNs), in which key elements are transcription factors (TFs) and the cis-regulatory sites where these TFs bind. Therefore, changes in the structure and composition of these GRNs are likely to underlie cell type evolution. Moreover, similarities in cell type-specific TF regulators and GRNs are indicators of cell type homology. However, the systematic analysis of GRNs within and between species has been precluded by several technical constraints, for example the absence of specific ChIP antibodies to profile the binding sites of orthologous TFs in different species.

In this research line, we aim at expanding our understanding of genome regulatory mechanisms from a phylogenetic perspective. To this end, we apply high-throughput chromosomal conformation capture (HiC) and chromatin immunoprecipitation (ChIP-seq) analysis to define and compare the regulatory genome architectures of unicellular and multicellular eukaryotes at key phylogenetic positions. Similarly, using comparative genomics and proteomics analyses, we study the origin and evolution of eukaryotic transcription factors, histone PTMs and their interactome of readers and modifiers.