Identification of b-catenin targets and molecular pathways that control cell reprogramming, and analysis of their interactions via network-identification algorithms

Identification of b-catenin targets and molecular pathways that control cell reprogramming, and analysis of their interactions via network-identification algorithms

Embryonic stem cells (ESCs) express genetic and epigenetic factor/s (genes, microRNAs, ncRNAs) that can reprogramme a somatic-cell nucleus. As a result, cell fusions between differentiated cells and embryonic cells produce ESC-like pluripotent reprogrammed hybrids. Our goal is to identify these factors, i.e. the “reprogrammers”, that are targets of β-catenin and that can reprogramme differentiated cells. Reverse engineering and forward algorithms will be used to infer the natural network of interactions surrounding the genes involved in the reprogramming of somatic cells. Furthermore, we will develop mathematical models to dissect out the threshold and timing effects of nuclear factor accumulation that control cell reprogramming. Finally, we will investigate the molecular functions of the identified reprogrammers, and therefore the molecular mechanisms of somatic-cell reprogramming. 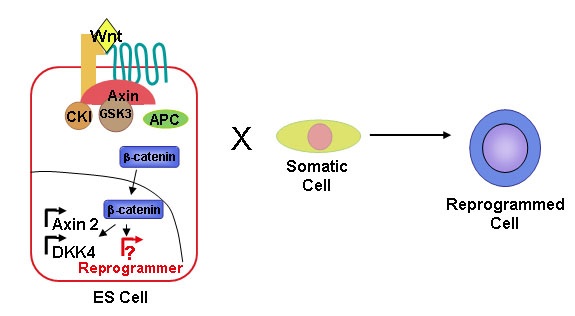 Periodic accumulation of beta-catenin in ES cells enables them to reprogramme somatic cells after fusion. Taken from Lluis et al, 2008.