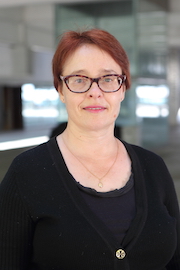 The Bioinformatics Unit provides researchers at CRG-CNAG/PRBB and external organizations with services of consultation, planning NGS and other genomic experiments, NGS data processing, analysis and management, software and database development, bioinformatics training, and access to high-performance computing resources at CRG.

The Unit works in synergy with the Genomics Unit and the Biomolecular Screening & Protein Technologies Unit (BMS-PT) to support users using high-throughput sequencing technologies from an experiment planning to delivery of timely and reliable results.

CRG researchers publish the databases of alternative splicing (30/08/2017)
The Vertebrate Alternative Splicing and Transcription Database (VastDB) is the largest resource of genome-wide, quantitative profiles of AS events assembled to date. VastDB provides readily accessible quantitative information on the inclusion levels and functional associations of AS events detected in RNA-seq data from diverse vertebrate cell and tissue types, as well as developmental stages.

The Centre for Genomic Regulation (CRG) hosts the Women for Africa Foundation awardee of 2017 (July 2017)
Dr. Elizabeth Balyejusa Kizito, Head of the Department of Agricultural Sciences, Uganda Christian University, is working together with the CRG Genomics and Bioinformatics units on the development of a robust set of genomic tools for more efficient breeding in Solanum aethiopicum.
The Women for Africa Foundation is a Spanish private, non-profit entity created in February 2012 by María Teresa Fernández de la Vega, the former Vice President of the Government of Spain, with the aim of promoting African women’s leadership in scientific research and technology transfer.

The CRG at the Science Fair (May 2017)
Members of the CRG Core Facilities presented to the public the Saca La Lengua project and talked about mouth microbiome.

LncATLAS database for subcellular localization of long noncoding RNAs has been published in RNA journal (April 2017)
The comprehensive resource of lncRNA localization in human cells, the LncATLAS database, is based on RNA-sequencing data sets and contains 6768 GENCODE-annotated lncRNAs represented across various compartments of 15 cell lines.

Genome Editing: Pressing the 'Delete' Button on DNA (02/10/2017)
Until recently, genomics was a «read-only» science. But scientists led by Rory Johnson at the University of Bern and the Centre for Genomic Regulation in Barcelona, have now developed a tool for quick and easy deletion of DNA in living cells.

For specifics on procedures and deliverables please contact the Unit at BioinformaticsUnit@crg.eu

To request a service or to propose a collaborative project please contact the Unit head at julia.ponomarenko@crg.eu