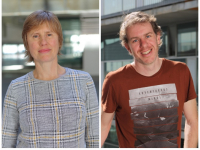 EMBO announced today that 65 outstanding life scientists have been elected to its membership, including CRG group leaders Fatima Gebauer and Ben Lehner. They will be joining a group of more than 1,700 of the best researchers in Europe and around the world.

“Election to the EMBO Membership is recognition of research excellence, and I am pleased to welcome so many great scientists to our organisation,” said EMBO Director Maria Leptin. “We received more nominations than ever before during this election cycle, which pays tribute to the strength and diversity of the European life sciences. Drawing on our new members’ expertise and insight will be invaluable in helping EMBO to deliver and strengthen its programmes and activities in the years to come,” she continued.

The total number includes 56 EMBO Members residing in 19 Member States of the European Molecular Biology Conference (EMBC) and nine EMBO Associate Members currently working in the USA and Japan. 40% of the elected researchers are women.

Fátima Gebauer is group leader of the Regulation of Protein Synthesis in Eukaryotes laboratory. She obtained her PhD in Sciences from the Autonoma University of Madrid, and performed postdoctoral research in the labs of Joel Richter (UMass, USA) and Matthias Hentze (EMBL, Germany) studying the regulation of mRNA translation in vertebrate and invertebrate embryonic development. Her main interests focus on molecular mechanisms of translational control. She contributed to the field of cytoplasmic polyadenylation demonstrating its relevance for mammalian meiotic progression, and established in vitro systems that allow the molecular analysis of translation events. In 2002, she obtained a Group Leader position at the CRG, where her group is analyzing the role of RNA binding proteins in mRNA translation, development and cancer.

Ben Lehner is an ICREA research professor and group leader of the Genetic Systems laboratory. He received his PhD from the University of Cambridge and did his post-doc at The Wellcome Trust Sanger Institute. He has been a group leader in the EMBL-CRG Systems Biology Research Unit since 2006 and an ICREA Research Professor since 2009 From 2014-17 he was also AXA Professor of risk prediction in age-related diseases and in 2010 he was selected as an EMBO Young Investigator. His work has been supported by both ERC Starting and Consolidator grants. He has received, amongst other awards, the Eppendorf Prize for Young European Investigators (2013), the Liliane Bettencourt Prize for Life Sciences (2016), and the EMBO Gold Medal (2016). His group studies the causes of phenotypic variation amongst individuals, including the distribution and effects of inherited genetic variation, somatic mutations and epigenetic differences (stochastic/environmental influences), including in cancer.

EMBO is an organization of more than 1700 leading researchers that promotes excellence in the life sciences. The major goals of the organization are to support talented researchers at all stages of their careers, stimulate the exchange of scientific information, and help build a European research environment where scientists can achieve their best work.

EMBO helps young scientists to advance their research, promote their international reputations and ensure their mobility. Courses, workshops, conferences and scientific journals disseminate the latest research and offer training in techniques to maintain high standards of excellence in research practice. EMBO helps to shape science and research policy by seeking input and feedback from our community and by following closely the trends in science in Europe. For more information: www.embo.org