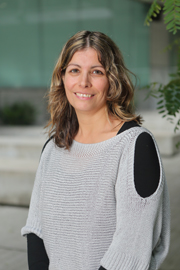 The regulation of gene expression is essential to ensure the proper cell division and differentiation.  In the living organism, the differences in gene expression between cells allow for the correct specification of tissues and, in the end, to the correct development of the organism. The mechanisms by which genes undergo activation or silencing in a particular cell type comprise recruitment of specific transcription factors, methylation of the DNA and histone post-translational modifications.

Histone marks, in particular, have been assigned a central role in the determination of cell commitment during differentiation by allowing for establishment and maintenance of particular gene expression patterns. However, the mechanism by which histone marks could influence gene expression is still uncertain. Strikingly, recent studies suggest that the role that chromatin would play in regulating transcription could be not as causative as previously thought. The tri-methylation of lysine 4 of the histone H3 tail, for instance, has been canonically associated to the transcription start site (TSS) of active genes. However, very recently, we have seen that genes that are expressed transiently for a short period of time during the fruit fly development do not present this histone modification. Also the mono-methylation of lysine 4 has been widely associated to enhancer regions; however, different groups have demonstrated that it is the enzyme responsible for the methylation deposition but not the histone mark itself that it essential for the enhancer function. These observations argue against a causative role of histone marks in regulation of gene expression, and point to a more consequential relationship.

In this framework, the overarching goal of our research line is to untangle the relationship between histone post-translational modifications and the regulation of gene expression.

The project "Implementation of FLEA-ChIP-Seq technology at single-cell level for the estudy of protein-DNA interactions" ("Implementació de la tecnologia de FLEA-ChIP-Seq a nivell single-cell per l'estudi d'interaccions proteïna-DNA) (ref. 2019 LLAV 00066) received funding from the Agència de Gestió d'Ajuts Universitaris i de Recerca (Catalan Agency of University and Research Grants Management) and the Secretariat of Universities and Research, Department of Business and Knowledge, of the Government of Catalonia. This project is co-funded by the European Regional Development Fund of the European Union, in the framework of the Catalonia's ERDF Operative Programe 2014-2020, with a grant amounting to 20,000 €.