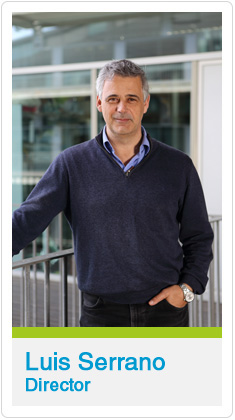 He was born in Madrid on July 2, 1959, and graduated in Biological Sciences from the Complutense University of Madrid (1981). He has a Master’s in Science from the Complutense University (1982) and a PhD in Biochemistry from the Universidad Autónoma de Madrid (1985). He received his PhD in Cell Biology at the Centro de Biología Molecular (CSIC-UAM) of the Universidad Autónoma de Madrid in 1987 and the University of Cambridge in 1991. Subsequently he spent 4 years in the laboratory of Professor Alan Fersht, at the Medical Research Council (MRC), in the United Kingdom, where he focused his research on protein folding.

He was Lecturer and Senior Lecturer at the Spanish National Research Council (CSIC), in Madrid, from 1988 to 1992. In 1993 he was appointed Head of Group at the European Laboratory of Molecular Biology (EMBL), in Heidelberg, Germany, and focused his work on protein folding and design. In the following years at the EMBL, he was named Senior Principal Investigator, in 2003, and Head of the Structural & Computational Biology programme, in 2006, the time he began to work on Systems Biology. In 2006 he was also named Head of programme at the Spanish National Cancer Research Centre (CNIO). In addition, in 1999, he was appointed research professor at the CSIC.

At the end of 2006, he moved back to Spain to direct the Systems Biology programme at the Centre for Genomic Regulation (CRG), where he also served as deputy director until his appointment as director in mid 2011. Since 2006 he has been an ICREA (Catalan Institution for Research and Advanced Studies) Research Professor. Currently, his research group focuses on synthetic biology, the engineering and design of biological systems.

He is a member of the Spanish Society for Biochemistry and Molecular Biology (SEBBM), member of the European Molecular Biology Organisation (EMBO), and member of the Royal Spanish Academy of Sciences (Spain). In 2003 he received the Marie Curie Excellence Award, for his work "Design of Biological Systems to improve quality of life", and in 2009 he was awarded the City of Barcelona prize (science category), an annual award organised by Barcelona City Council.

He has always been very aware of the need to transfer research results to society and the importance of doing so. For this reason, in 1999, he was involved in setting up one of the first Spanish biotechnology companies, Diverdrugs (Barcelona), and was also co-founder of Cellzome (Heidelberg, Germany), EnVivoPharmaceutical (Boston, USA) and Triskel Pharmaceuticals (Dublin, Ireland). He is currently on the Scientific Advisory Board of the following companies: Diverdrugs (Barcelona, Spain), EnVivoPharmaceutical (Boston, USA), Entomed (Strasbourg, France), Cellectis (Strasbourg, France). Together with Maria Lluch, in 2020, he founded Pulmobiotics S.L., a pre-clinical life sciences company using synthetic biology to develop new treatments and vaccines for various types of lung diseases.

He has been and still is the principal investigator of numerous research projects funded by the European Union (6th, 7th and H2020 Framework Programmes) and the Spanish Ministry of Economy, Industry and Competitiveness (as part of the Consolider and Plan Nacional programmes). In recent years he was awarded prestigious grants from the European Research Council: two ERC Advanced Grants and two ERC Proof of Concept grants.

Throughout his professional career he has organised and participated in numerous international conferences, has supervised a total of 20 doctoral theses, and has published more than 360 articles in international journals (Nature, Science, The Journal of Molecular Biology, etc.), as well as having registered 20 patents.

Position: Executive Assistant to the Director