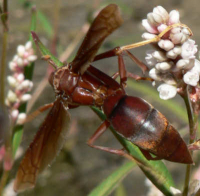 WASP TRANSCRIPTOME CREATES A BUZZ
International scientists have sequenced the active parts of the genome – or transcriptome – of primitively eusocial wasps to identify the part of the genome that makes you a queen or a worker. Their work, published in BioMed Central’s open access journal Genome Biology, shows that workers have a more active transcriptome than queens. This suggests that in these simple societies, workers may be the ’jack-of-all-trades’ in the colony - transcriptionally speaking - leaving the queen with a somewhat restricted repertoire.
Studying primitively eusocial species - like these wasps - can tell us about how sociality evolves. Seirian Sumner and colleagues sequenced transcriptomes from the eusocial tropical paper wasps – Polistes canadensis. All social species ultimately evolved from a solitary ancestor – in this case a solitary wasp, who lays the eggs and feeds the brood. But how does this ancestral solitary phenotype split to produce specialised reproducers (queens) and brood carers (workers) when a species becomes social?
This paper gives a first insight into the secret lives of social insects. It shows that workers retain a highly active transcriptome, possibly expressing many of the ancestral genes that are required for our solitary wasp to be successful on her own. Conversely, queens appear to shut down a lot of their genes, presumably in order to be really good reproducers.
Long-standing analyses based on the fossil record holds ants and wasps in a clade known as Vespoidea, with bees as a sister group. The team reassess the relationships between the subfamilies of bees, wasps and ants and suggest that wasps are part of a separate clade from ants and bees, though further genome sequences and comparative data will help to resolve this controversy.
Researchers at the Centre for Genomic Regulation (CRG) in Barcelona have participated in this project. In particular, the contribution of researchers in Spain have been the evolutionary analysis of the new transcriptome in the context of other social insects. Their work allowed us to find out that the key for the social structure in insects is not in genes evolution but in genes regulation (in workers the activity of the genome is higher than in queens, which have less activity because of their specialization).
The dataset offers a first chance to analyse subfamily relationships across large numbers of genes (93). Toni Gabaldón, group leader of the Comparative Genomics laboratory at the Centre for Genomic Regulation (CRG) explains, “These results suggest that wasps could be basal to bees and ants – unlike previously tought. We sill need much more genome sequences but, if it is confirmed, it would have important implications on how we explain the evolutionary origin for social behavior in insects“. CRG researchers participating in this project are Pedro Ferreira (first author of this paper) and the group leaders Roderic Guigó and Toni Gabaldón.
Sirian Sumners, principal investigator of this work, says: ‘This finding would have important general implications for our understanding of eusociality as it would suggest that bees and ants shared an aculeate wasp-like ancestor, that ants are wingless wasps, and that bees are wasps that lost predacious behaviours.’
Reference: Transcriptome analyses of primitively eusocial wasps reveal novel insights into the evolution of sociality and the origin of alternative phenotypes  Pedro G Ferreira, Solenn Patalano, Ritika Chauhan, Richard Ffrench-Constant, Toni Gabaldon, Roderic Guigo and Seirian Sumner. Genome Biology (in press). doi:10.1186/gb-2013-14-2-r20