Home > Trisomy 21: how an extra little chromosome throws the entire genome off balance 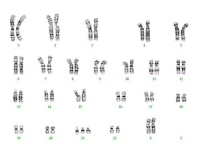 April 16th, 2014. Barcelona. Despite much research, the exact mechanisms causing the various symptoms associated with Down syndrome remain a mystery. According to a hypothesis called "gene dosage disequilibrium", the presence of a third chromosome 21 could influence the expression of all the other genes in the genome. That is, this extra genetic material could disrupt the process through which information carried in the genes is decoded, therefore modifying the cellular function.

Based on this hypothesis, several research groups have tried, so far without success, to identify changes in gene expression within trisomic cells and link them with symptoms seen in patients. However, as the level of most gene expression varies from one person to another, it is extremely difficult to discriminate between changes exclusively linked to trisomy 21 and those due to natural variation between individuals.

At UNIGE, Stylianos Antonarakis's team has the unique opportunity to examine the genomes of two identical twins with the exact same genetic makeup, except for an extra chromosome 21 present in one of them. Indeed, the chromosome 21 distribution error can take place during an early cellular division, after the original fertilized egg splits in two.

To compare gene expression levels between the twins, UNIGE researchers used recent, high-throughput sequencing technologies and other biotechnological tools developed within the Department of Genetic Medicine and Development, or in collaboration with scientists in Strasbourg, Barcelona, Amsterdam, and Seattle. They were thus able to eliminate interindividual variations and identify the changes in gene expression exclusively due to trisomy 21.

The researchers noticed that the expression of genes located on all the other chromosomes (outside of chromosome 21) were disturbed in trisomic cells. 'We were very surprised by this result,' explains Audrey Letourneau, who co-authored this study. 'It does seem that this extra little chromosome has a huge influence on the entire genome.'

Generally speaking, chromosomes are divided into domains that contain genes with rather similar levels of RNA production. RNA is the molecule which transmits the information contained in DNA, before this information is translated into proteins with precise functions. In the twin with Down syndrome, the domains are sometimes over-expressed, and sometimes under-expressed when compared with the healthy twin.

By comparing their results with data previously published by other research groups, UNIGE researchers noticed that this specific chromosomes organization correlates with DNA position in the cell nucleus. Therefore, domains over-expressed in the twin with Down syndrome correspond to portions of DNA known to primarily interact with the nucleus periphery.

This study therefore shows for the first time that the DNA position in the nucleus or the biochemical characteristics of DNA-proteins interactions in the trisomic cells is modified, leading to changes in the gene expression profile. Federico Santoni, who co-authored this study, notes that, 'These changes do not only affect chromosome 21, but the entire genome. The presence of about 1% of extra genetic material in the trisomic cells hence modifies the function of the whole genome, and disrupts the general equilibrium of gene expression.' 'We could make an analogy with climate change,' adds Professor Antonarakis. "Even if the temperature rises by only one or two degrees, it will rain a lot less in the tropics, and a lot more in temperate zones. Global climate equilibrium can thus be disrupted by a tiny element.'

This study opens the door to a new way of understanding the molecular mechanisms that explain the symptoms of Down syndrome. The vast amount of genomic data obtained with high-through output sequencing techniques offer lots of possibilities for researchers. "This advancement has been possible thanks to the extraordinary development in genomic technologies, that allow us to interrogate the activity of the genome with unprecedented resolution" says Roderic Guigó, coauthor, head of the Computational Biology of RNA Processing group at the CRG and professor at the Universitat Pompeu Fabra (UPF).

On the role of CRG in this study, David Gonzalez, former postdoc researcher at Roderic's lab, states that "our role was to perform the bioinformatic analysis of RNA sequencing data from different study samples in order to determine the expression levels of different genes and transcripts in each sample."

The UNIGE team will now continue its research to understand molecular mechanisms at stake, and link this disrupted gene expression with the phenotypes associated with Down syndrome. The end goal of this research is to find ways to revert the dysregulation of cellular gene expression back to normal, with the objective to correct the cellular abnormalities in this disease. Progress in this field could also be applied to other diseases with genome imbalance.