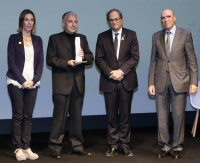 Roderic Guigó, coordinator of the CRG Bioinformatics and Genomics Programme, received the National Research Award. The award ceremony took place at the National Theatre of Catalonia in Barcelona on 15th October and it was chaired by the President of the Catalan Government, Mr. Quim Torra.

The National Research Award is the highest recognition for research excellence in Catalonia, which is organised by the Catalan Government and the Catalan Foundation for Research and Innovation (FCRi). It recognises significant contribution, on an international scale, towards scientific progress in any of the following areas; human and social science, health and life sciences, engineering, experimental sciences and technology.

The members of the jury highlighted Roderic Guigó’s contribution to human genome research by participating in several projects and consortia, such as the Human Genome Project and ENCODE, as well as developing new computational methods for genome analysis. They considered his research contribution crucial to improving methods for interpreting the information encoded in our genome while making progress in the field of bioinformatics.

The Foundation for Research and Innovation of Catalonia (FCRi) and the Catalan Government organize the National Research Awards every year to honour individual scientists and institutions that have made outstanding contributions to society. Awardees from the 2017 edition also include Italian astrophysicist at IEEC-CSIC, Nanda Rea, winner of the National Research Award for Young Talent; the TV3 La Marató Foundation in the category of Scientific Patronage; the UABDivulga online publication in the category of Scientific Communication; and the Cooperative Automotive Research Network (CARNET) in the category of Public-Private Partnership.