Home > Link between defects in DNA replication and loss of heterochromatin 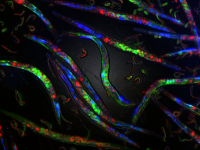 Cell division is key for renewing the cells in our tissues and organs.  There are two particular processes in which cell division is crucial: embryonic development and tumorigenesis. A fault in the process that copies DNA during cell division can cause genetic changes, so impaired DNA replication is a well-known cancer hallmark and a driver of genomic instability.

Now, scientists at the Centre for Genomic Regulation (CRG) in collaboration with the Josep Carreras Leukaemia Research Institute (IJC) and the Institute for Health Science Research Germans Trias i Pujol (IGTP) have discovered that impaired DNA replication can also cause large epigenetic changes. Their study, which was performed in worms (the model organism Caenorhabditis elegans), suggests that these genome-wide epigenetic alterations establish new gene expression states that may be inherited for up-to five generations. This is a striking example of trans-generational inheritance of epigenetic changes meaning that two individuals may differ in gene expression only because of the stress experienced by their ancestors.

The researchers, led by ICREA research professor and group leader at the CRG Ben Lehner, also identified the mechanism causing these epigenetic changes. “For the correct function of cells and ultimately the health of the organism, it is important to keep certain genes active and others silenced. Inside cells, there are DNA-protein complexes called heterochromatin that prevent genes from becoming activated when they should not be. Initially, we noticed that a gene artificially inserted into the worm genome and normally silenced by heterochromatin was activated in animals that carried mutations in proteins involved in the copying of DNA,” explains Tanya Vavouri, CRG alumna currently group leader at IJC and IGTP and coauthor of this study. “We found that this was caused by loss of heterochromatin and that other genes also silenced by heterochromatin were activated too. Unexpectedly, the gene was inappropriately activated for five generations in animals that did not carry the mutation in DNA replication but had ancestors that did,” she adds.

“Our results show that impaired DNA replication not only causes genetic alterations but also genome-wide epigenetic changes that can be stably inherited,” says Ben Lehner, senior author of the paper. An important question in epigenetics is the extent to which epigenetic states are transmitted between generations. Lehner and collaborators are addressing this and other questions from many different angles. They previously reported that some temperature-induced gene expression changes can also be inherited between generations. “We hope that our work will change the way people think about the impact of replication stress during tumorigenesis and embryonic development as well as about inter-generational inheritance,” he concludes.