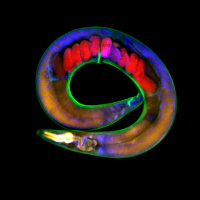 Scientists at the Centre for Genomic Regulation (CRG) in Barcelona and the Josep Carreras Leukaemia Research Institute and The Institute for Health Science Research Germans Trias i Pujol (IGTP) in Badalona, Spain, have discovered that the impact of environmental change can be passed on in the genes of tiny nematode worms for at least 14 generations – the most that has ever been seen in animals. The findings will be published on Friday 21st April in the journal Science.

Led by Dr Ben Lehner, group leader at the EMBL-CRG Systems Biology Unit,  ICREA and AXA Professor of Risk Prediction in Age-related Diseases, together with Dr Tanya Vavouri CRG Alumna and currently group leader at the Josep Carreras Leukaemia Research Institute and the Institute for Health Science Research Germans Trias i Pujol (IGTP), the researchers noticed that the impact of environmental change can be passed on in the genes for many generations while studying C. elegans worms carrying a transgene array – a long string of repeated copies of a gene for a fluorescent protein that had been added into the worm genome using genetic engineering techniques.

If the worms were kept at 20 degrees Celsius, the array of transgenes was less active, creating only a small amount of fluorescent protein. But shifting the animals to a warmer climate of 25 degrees significantly increased the activity of the transgenes, making the animals glow brightly under ultraviolet light when viewed down a microscope.

When these worms were moved back to the cooler temperature, their transgenes were still highly active, suggesting they were somehow retaining the ‘memory’ of their exposure to warmth. Intriguingly, this high activity level was passed on to their offspring and onwards for 7 subsequent generations kept solely at 20 degrees, even though the original animals only experienced the higher temperature for a brief time. Keeping worms at 25 degrees for five generations led to the increased transgene activity being maintained for at least 14 generations once the animals were returned to cooler conditions.

Although this phenomenon has been seen in a range of animal species – including fruit flies, worms and mammals including humans – it tends to fade after a few generations. These findings, which will be published on Friday 21st April in the journal Science, represent the longest maintenance of transgenerational environmental ‘memory’ ever observed in animals to date.

“We discovered this phenomenon by chance, but it shows that it’s certainly possible to transmit information about the environment down the generations,” says Lehner . “We don’t know exactly why this happens, but it might be a form of biological forward-planning," adds first author of the study and CRG alumnus Adam Klosin. "Worms are very short-lived, so perhaps they are transmitting memories of past conditions to help their descendants predict what their environment might be like in the future,” adds CRG Alumna and co-leader of this study Tanya Vavouri.

Comparing the transgenes that were less active with those that had become activated by the higher temperature, Lehner and his team discovered crucial differences in a type of molecular ‘tag’ attached to the proteins packaging up the genes, known as histone methylation.*

Transgenes in animals that had only ever been kept at 20 degrees had high levels of histone methylation, which is associated with silenced genes, while those that had been moved to 25 degrees had largely lost the methylation tags. Importantly, they still maintained this reduced histone methylation when moved back to the cooler temperature, suggesting that it is playing an important role in locking the memory into the transgenes.**

The researchers also found that repetitive parts of the normal worm genome that look similar to transgene arrays also behave in the same way, suggesting that this is a widespread memory mechanism and not just restricted to artificially engineered genes.

*DNA inside cells is wrapped around ball-shaped proteins called histones. These can be modified with molecular ‘tags’ (epigenetic marks) in a number of different ways. Some epigenetic marks are associated with active genes, while others are linked to gene silencing. In this paper, the researchers were studying a histone modification known as H3K9 trimethylation, which represses gene activity.

The Centre for Genomic Regulation (CRG) is an international biomedical research institute of excellence, whose mission is to discover and advance knowledge for the benefit of society, public health and economic prosperity. The CRG believes that the medicine of the future depends on the groundbreaking science of today. This requires an interdisciplinary scientific team focused on understanding the complexity of life from the genome to the cell to a whole organism and its interaction with the environment, offering an integrated view of genetic diseases.

It is a non-profit foundation created in December 200 and funded by the Catalan Government through the Departments of Economy & Knowledge and Health, the Spanish Ministry of Economy and Competitiveness, the "la Caixa" Banking Foundation, and includes the participation of Pompeu Fabra University.

The Josep Carreras Leukaemia Research Institute is a member of the CERCA group of centres founded by the Josep Carreras Leukaemia Foundation and the Catalan Government to promote the fight a biomedical cluster in the north of Spain. The IJC will work to improve the diagnostics, prognosis and treatment of leukaemia and other haematological diseases. It will do this by assembling a group of international researchers; they will work on both basic and clinical aspects of the diseases and in close collaboration with reference hospitals and the doctors treating patients. The eventual goal is to make all leukaemias curable.

About the Health Science Research Germans Trias i Pujol (IGTP)

The Institute for Health Science Research Germans Trias i Pujol (IGTP) is a public research centre in the Autonomous region of Catalonia in Northern Spain dedicated to increasing scientific knowledge and transferring it to improve the care and lives of patients.

The institute is attached to one of the large teaching hospitals in the Barcelona area; the Germans Trias University Hospital (HUGTP), and is located on the biomedical campus that surrounds it, Campus Can Ruti.  It is a CERCA centre; a member of the biocluster supported and supervised by the Autonomous Catalonian Government.  It is also accredited as a Centre of Excellence by the Instituto Carlos III (Spanish Government) and in this capacity acts as an umbrella organization for scientific research on the campus, where it works closely with the other centres located there.