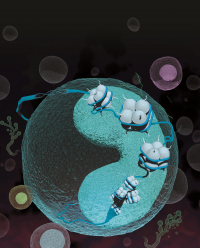 Researchers from the EU-funded BLUEPRINT project join their international colleagues this week at the 2016 International Human Epigenome Consortium (IHEC) conference in Brussels to report the latest results in understanding blood cell development and blood disease.

BLUEPRINT received €30 million from the European Union to decipher the role of epigenetics in normal and diseased blood cells. Epigenetic effects alter the activity of genes without altering the DNA code, and play an important role in development and disease.

The conference held in Brussels on 8-9 September 2016 marks the final stage of the BLUEPRINT project. A series of scientific publications will appear later this year in leading journals describing the exciting results and insights hitherto. In addition to this major release of BLUEPRINT results by the end of the year, more project findings are yet to come in the following months.
“BLUEPRINT has produced more new science and more understanding of blood cell disease than we could have imagined at the outset,” says BLUEPRINT coordinator Professor Hendrik (Henk) Stunnenberg from Radboud University, Nijmegen, The Netherlands. “We have forged an alliance of researchers and innovative companies from around Europe and, working closely with international partners, we already see results that, in time, will improve the lives of patients. I’ve been honoured to coordinate such a diligent, creative and effective group, who have delivered beyond all expectation.”

BLUEPRINT was officially launched on 1 October 2011. With the principal funding of €30 million by the European Union the project has been the European cornerstone of the international research cooperation effort IHEC, bringing together organisations and researchers from across the globe. At the CRG, four principal investigators are participating in this project including Xavier Estivill, Roderic Guigó and Stephan Ossowski at the Bioinformatics and Genomics programme, Thomas Graf at the Gene Regulation, Stem Cells and Cancer programme, as well as Ivo Gut at the CNAG-CRG. Involving 42 leading European universities, research institutes, small and medium-sized enterprises (SMEs) and industry partners from 12 countries, BLUEPRINT focused on the epigenetic states of cells in blood because this tissue is relevant to many human diseases from cancers to autoimmune diseases such as diabetes. Together, blood diseases affect millions of people worldwide.

“Understanding epigenetic changes that are so important to human health demands concerted and coordinated effort of leading researchers,” says Ruxandra Draghia–Akli, Deputy Director–General, Directorate General for Research and Innovation, European Commission. “We can only tackle these challenges in partnerships, examining the results covering various genetic regions and changes in distinct cell types and at different times. The EU must implement and further develop the concept of personalised medicine, stimulate growth of medical innovation and data solutions and open its research to the world,” Draghia–Akli continues. “The project has contributed towards reaching these aims and we expect that its results will play an important part in future breakthroughs to tackle blood disorders and other diseases.”

Because our cells have efficient repair systems, our DNA code remains largely unchanged; however, environmental factors such as diet, disease and stress can alter a cell’s epigenetic state, and so change the way our cells read that code. Epigenetic changes can chemically tag the DNA, altering the activity of certain genes, or compact the DNA, so that genes are no longer active.
Programmed changes in the epigenetic state are part of normal cell or embryo development and their pattern is inherited by descendent cells. However, the importance of pathological changes to the epigenetic state has become apparent only in the past five to ten years, as new technologies have enabled researchers to study many epigenomes.

“Our BLUEPRINT results have important implications for our understanding of biology and, importantly, for novel therapeutic development,” says Henk Stunnenberg. “Epigenetics plays a crucial role in cell and embryo development, but also defines what constitutes a ‘good’ cell and clarifies a person’s individual disease. The results are truly a blueprint for biology and medicine. Moreover, the industrial partners involved in the project have contributed to the development of smart technologies.”

BLUEPRINT has been remarkably effective: by bringing together many researches and making the data of >1000 experiments publicly available, BLUEPRINT reveals that personal epigenetic states are important for stratifying disease into subclasses and exploring personalised treatment. The BLUEPRINT data and tools to inspect the data have been released freely to the research community, upholding the European Union pledge to maximise open access to its funded research.