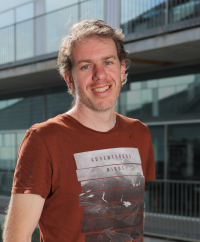 The EMBO Gold Medal, endowed with 10,000 Euro, is awarded annually to young scientists for outstanding contributions to the life sciences in Europe. By awarding the EMBO Gold Medal, EMBO wishes to acknowledge and highlight some of the remarkable achievements of young group leaders, who play a major role in building a strong research environment.

Ben Lehner received the EMBO Gold Medal 2016 for his contributions to understanding the origins of phenotypic diversity in development and evolution. “Ben Lehner has impressed the award committee with a very broad research interest, ranging from the genetics of cancer, to evolution, circadian oscillations, and the dynamics of gene expression networks,” commented Maria Leptin, EMBO Director.

His research showed that phenotypic diversity can be explained not only by genetics and environmental conditions but also by stochastic variances in gene expression. He then explored other aspects on genotype-phenotype relations, which lead him to studies such as the one showing that genome regions with higher gene expression levels have lower mutation rates, which can be crucial for understanding how different cancers occur.

Richard Benton from the University of Lausanne was also awarded the Gold Medal this year for his work on olfactory perception in insects. The award ceremony will take place on September 11, 2016, at the opening session of The EMBO Meeting in Mannheim, Germany.

Ben Lehner received his PhD from the University of Cambridge in 2004. He did his post-doctoral research in the group of Andrew Fraser at The Wellcome Trust Sanger Institute. In 2006, he moved to the Centre for Genomic Regulation (CRG) in Barcelona, where he became a group leader at the EMBL-CRG Systems Biology Research Unit. He has been named ICREA Research Professor in 2009 and AXA Professor of risk prediction in age-related diseases in 2014. He has received, amongst others, the Eppendorf Prize for Young European Investigators (2013) and the Liliane Bettencourt Prize for Life Sciences (2016), and was named EMBO Young Investigator in 2010.