Zinc Fingers: a new tool to fight against Huntington's Disease

Zinc Fingers: a new tool to fight against Huntington's Disease 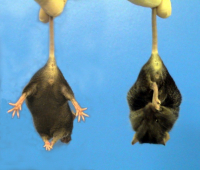 Barcelona, ​​October 8, 2012. Huntington's disease (HD) is an inherited genetic disorder caused by the multiple repetition of a DNA sequence (the nucleotides CAG) in the gene encoding a protein called "Huntingtin". People who do not suffer from the disease have this sequence repeated 10 to 29 times. But in a sick person, the triplet is present more than 35 times.

Huntingtin protein can be found in various tissues of the human body and is essential for the development and survival of neurons in adults. When the mutant gene is present, an aberrant form of the Hungtingtin protein is produced, causing the symptoms of the disease: involuntary movements, changes in behavior and dementia, among others. Although there are several promising studies, there is currently no cure for HD. There are only palliative treatments of symptoms, and Huntington's patients die about 15 years after the symptoms onset.

Unlike other neurodegenerative diseases (such as Alzheimer or Parkinson), only a single gene is responsible for HD (i.e. the disorders is monogenic), and a therapy based on the inhibition of the gene, will open new perspectives of research for the development of a treatment.

A recently developed tool by scientists around the world is based on the modification of proteins that are found naturally in all living beings. These proteins are called Zinc Finger proteins, and can recognize and bind to specific DNA sequences. This enables the regulation of those genes to which they are attached.

A study conducted by researchers of the Centre for Genomic Regulation (CRG) in Barcelona provides positive results reducing the chromosomal expression of the mutant gene, which would prevent the development of disease. The research is published in Early Edition by the journal Proceedings of the National Academy of Sciences (PNAS).

"We designed specific ZFP that recognize and specifically bind to more than 35 repetitions of CAG triplet, preventing the expression of the gene containing these repeats and reducing the production of the mutant Huntingtin protein. When applying this treatment to a transgenic mouse model carrying the human mutant Huntingtin gene, we observed a delayed onset of the symptoms, "says Mireia Garriga-Canut, first author of the study and researcher at the Gene Network Engineering group at the CRG. Another co-author of the study, Carmen Agustín Pavón, adds that "the next step is to optimize the design for an effective and durable treatment for patients. This would pave the way to find a therapy for Huntington's disease".

The research was funded by the FP7 program of the European Commission and the Ministry of Science and Innovation of Spain.

A healthy mouse (left) extends and moves his limbs in an attempt to liberate when lifted by the tail. By contrast, a transgenic mouse expressing human mutant Huntingtin (right) displays a clasping phenotype, characteristic of neurological disorders.