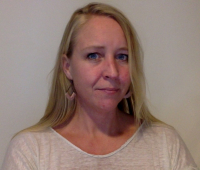 Picture: Roni Wright is a researcher, member of the CRG Gender Balance Committee, and associated professor at the International University of Catalonia.

El País, one of the main Spanish newspapers, accepted to publish a nice op-ed article written by Roni Wright, staff scientist at Miguel Beato’s lab at the Centre for Genomic Regulation, about Shyamala, Vice President Kamala Harris’ mother, who is a role model for scientists who are mothers.

Below you will find the original article in English.

One of the greatest gifts in being a parent is seeing the wonderment in my three young children's eyes. The trivial things we adults take for granted; like when a fish swims round their toes in the sea, when they see a rainbow, splash in puddles, hear a plane roaring past or make that first basket dunk. I love hearing them gasp at the magic of the world and all the possibility it holds.

I never expected this year’s endless source of wonder to be the American 2020 Presidential Election, where my kids of primary school age kept asking how Biden was looking like in the polls before having even left for school.

It was nice to see the kids do extra maths at home, calculating the differences between votes and tallying up the different electoral college numbers. But the most sobering moment was when my daughter reacted to Joe Biden and Kamala Harris’ speech, knowing that Kamala was the first female Vice President in history.

“Wow! She can be Vice President?” she asked.

My heart sank. Why was she so surprised that a woman could reach these heights?

“Not just that,” I replied. “Her mum is also a scientist.”

“No way, I didn’t know!” she exclaimed. “Does that mean I can be president?”

My daughter’s reaction is why Kamala Harris’ victory is a win for mothers in science like me. Kamala credits much of her success to Shyamala Gopalan Harris, her brilliant scientist mum who is coincidentally also in the same field as me – breast cancer. Shyamala managed to raise two daughters as a single parent whilst obtaining a tenured faculty position and carrying out pioneering cancer research.

Shyamala is a role model for scientists who are mothers, giving us hope and reassurance for the everyday sacrifices and struggles we make. I have my dark moments and doubts over my career. Research is unpredictable, notoriously unstable and demanding both on me and my family. I have normalised waking up at 5am every day to work before the children wake so that we can spend time as a family later without being distracted about work deadlines. Like many other working mums who work weekends and nights, I miss precious moments like waving the children off on their first school trip away, or singing in the choir.

I have missed two of my children's birthdays every other year since they were born because it clashed with the main research conference in my field. Will our children grow up to remember that Mum wasn’t there for my birthday or never came to collect me from school? Or will they remember that we worked hard and had the courage to follow our passion?

Though things have improved four decades since Shyamala balanced her career with raising a family, I have yet to meet single parents who are active scientists in my field of research. There is little reason for optimism, with the pandemic hitting female scientists especially hard because they perform a disproportionate amount of familial duties, such as caring for children. The proportion of COVID-19 papers with a woman first author being 19% lower than that for papers published in the same journals in 2019. Unless the scientific community does more to support female researchers and single parents, we risk losing a generation of bright minds.

I still vividly remember the first person to inspire me to pursue a life in science, Mr Cassidy, my Chemistry teacher in secondary school in Wales. But it wasn’t until I returned to where I was born in Scotland to start my postgraduate studies that I had a female role model. The then Director of the Cancer Research UK Beatson Institute in Glasgow, Karen Vousten, gave a passionate lecture that really struck me. I remember coming out of the amphitheatre feeling high and bouncing off the walls, telling everyone I came across how inspiring it was. It’s that passion that still sustains researchers like me and my female colleagues today, overcoming the additional burden we carry as mothers.

Inspiration is like a flame that ignites a spark of imagination in others, like a torch we pass on. I am hoping to pass on this torch when I speak to Mr. Cassidy’s new class of pupils soon, hoping to inspire others in gratitude for what he did for me 25 years ago. And although Shyamala Gopalan Harris is no longer with us, her daughter is the spark that will inspire so many around the world.

When Kamala Harris is inaugurated this week it will be a turning point in history for many reasons. That a single parent female scientist raised the first female Vice President of the most powerful nation on Earth is one of them. I hope that in a very small way, I too may inspire my children. They don’t need to be Vice President, but I’m glad they at least know they can be. One day maybe even President.