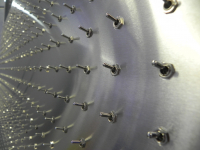 Led by ICREA research professors at the Centre for Genomic Regulation, Luciano Di Croce and Marc A. Marti-Renom, the study focused on a set of genes with what’s known as bivalent promoters – two-way genetic ‘control switches’ that are poised either to turn on in early development and rapidly drive high levels of gene activity, or to switch off and shut down the gene completely. These genes play essential roles in early development where cells have to make quick decisions about which fate to adopt, so the poised switches allow them to quickly flip into the correct pattern of gene activity.

This two-way gene switches mechanism is a fine tuning control system which allows cells to quickly activate or inhibit genes during early embryonic development but it can be also involved in cancer. Previous work had already shown that there are opposing types of chemical ‘tags’, known as histone modifications, that are present on these two-way switches – one set is associated with gene activation and the other with gene silencing. The active tags are put in place by a molecule called MLL2, while the silencing marks are put on by Polycomb proteins. Polycomb proteins also play important roles in human carcinogenesis and cancer development and progression.

To find out more about the interplay between the two type of histone modifications on the switches, postdoctoral researcher Gloria Mas, first author of the work at Di Croce’s team, studied mouse embryonic stem cells growing in the lab. These cells are capable of changing into all the different tissues in the body, and genes with bivalent switches play a key role in setting them off on the right developmental pathway.

The researchers used genetic engineering techniques to remove MLL2 from embryonic stem cells, removing all the activating histone modifications from the bivalent gene switches and leaving only the silencing tags and associated Polycomb proteins. They found that these modified cells were no longer able to grow into embryoid bodies – tiny clumps of cells that go through some of the early processes seen in early development – and that many important developmental genes weren’t activated when they should have been.

“We found that changing the balance of histone modifications at these promoters had profound effects on the activity of these vital genes,” explains Di Croce.

Looking further at three-dimensional organisation of the genome following changes in histone modification at these promoters, the investigators found that the bivalent genes had been relocated to regions that are usually associated with inactive genes.

“Genes that should normally be active have been packed away in areas that contain silent genes that are not normally needed in these cells – it’s the genetic equivalent of putting things away in the basement if you don’t need them anymore,” says Marti-Renom, group leader at the Centro Nacional de Análisis Genómico of the Centre for Genomic Regulation (CNAG-CRG).

The Di Croce and Marti-Renom teams also noticed something else unusual about the genes with two-way switches in cells lacking MLL2. In normal embryonic stem cells, the genes loop around so that their starts and ends are very close together. This means that the gene-reading machinery can quickly hop from the end back to the beginning when it is very active. But this connection was lost in cells without MLL2, revealing an intriguing association between histone modifications and the three-dimensional organisation of DNA and proteins inside the nucleus.

Not only do the team’s findings shed light on the earliest points in development when cells are quickly making decisions about what to do in order to build an embryo, there are also implications for understanding what might have gone wrong when development fails or in diseases involving disrupted gene activity, including cancer. Also, their results might have implications for novel cancer therapies, which could target at cells in early cancer development.

“We now know more about the role of histone modifications at bivalent promoters and why they are important for proper activation of the genes,” says Di Croce. “It’s clear that there needs to be a balance between active and repressive marks in order to maintain the looped conformation for quick activation, and we now understand what happens when that balance changes.”