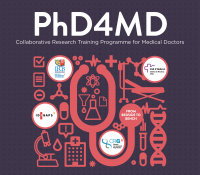 Eva Calvo, Juan Miguel Cejalvo and Alberto Indacochea are the three physicians who, this October, will be admitted to the  PhD for Medical Doctors Programme PHD4MD(PhD4MD), organised by the Centre for Genomic Regulation (CRG), the Institute for Research in Biomedicine (IRB Barcelona), the August Pi i Sunyer Biomedical Research Institute (IDIBAPS), and the Vall d’Hebron Research Institute (VHIR)—the last two linked to the Clínic and Vall d’Hebron University Hospitals, respectively, both in Barcelona. Over the next three years, the selected candidates will develop their respective theses on a translational research project.

In addition to outstanding CVs, the three candidates share a commitment, namely to help patients beyond medical practice. During their residencies, all three witnessed how biomedical research has in recent years contributed to advancing diagnostic techniques, treatments, and the wellbeing of patients. They also now coincide in putting their knowledge and talent to the service of biomedical research of excellence, which they will undertake in these four centres in Barcelona.

During her residency in the Psychiatric Service of the Vall d’Hebron University Hospital, Eva Calvo was drawn to some of the studies conducted by VHIR’s Psychiatry, Addictions and Mental Health Group, headed Dr. Miquel Casas, and became involved in them. “From the very start, the project on the identification of biomarkers for Attention Deficit Hyperactivity Disorder, coordinated by Dr. Marta Ribasés, greatly appealed to me. Now I will have the opportunity to delve further into this field of research without losing touch with clinical practice,” she explains.

Eva holds a Degree in Medicine from the “Universitat Autònoma de Barcelona” and is currently studying a Masters in Social Cognitive Therapy at the “Universitat de Barcelona”. Over the next three years, she will be working with Dr. Casas’ group at VHIR and with the team devoted to Genomics and Disease, headed by Dr. Xavier Estivill at CRG.

Also, after his residency at the University Hospital Germans Trias i Pujol (ICO-Badalona), Alberto Indacochea, who holds a Degree in Medicine from the “Universidad Católica Santa María de Arequipa” (Peru), and is specialised in Oncological Medicine, will also be working with the CRG and VHIR. Alberto says that translational and personalised medicine were one of the things that attracted him into oncology.

“During my residency, I saw how results derived from basic research were translated to clinical practice in the form of drugs and biomarkers. Now I have the chance to learn and gain skills to be better prepared for this new scenario in oncology,” says Alberto. He will now join the group devoted to the Regulation of Protein Synthesis in Eukaryotes, headed by Dr. Fátima Gebauer at CRG, and the Pathology and Molecular Oncology team at VHIR, led by Dr. Matilde Lleonart. His project will address DNA-binding proteins as possible biomarkers for cancer progression.

Juan Miguel Cejalvo has also opted for oncology. He specialised in this field at the University Hospital of Valencia, where he focused on phase I, II and III clinical trials of new target drugs. He also decided upon this discipline to do a Masters at the Spanish National Cancer Research Centre (CNIO). “I want to be an oncologist able to combine good clinical practice with a deep understanding of the molecular bases of the disease. I am convinced that the combination of basic and clinical research will allow us to further our knowledge and advance in our fight against cancer,” comments the oncologist.

The PhD for Medical Doctors Programme (PhD4MD) came about from the commitment of the four research centres to speed up the translation of biomedical research results produced in Spain to clinical practice. This first call was targeted at physicians working in Spain and who had completed their residency in the last two years and who wanted to develop a PhD in a cutting-edge research project.

The programme will soon be announcing its second call with new characteristics, as the extension from two to four years of the deadline for the ending the residence in order to apply, and the opening of the programme to doctors that have performed their residence in other countries of Europe.