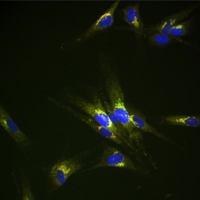 Secretions from senescent cells affect neighbours, and could affect cancer and ageing

At the end of their life, having divided fifty or more times, our cells are often eased into retirement. They enter a state of limbo known as senescence, still active but unable to replicate again. Although typically associated with ageing, this phenomenon is also activated by oncogenes (oncogene-induced senescence, OIS) keeping at bay cells that are damaged or dangerous, in order to prevent their spread. Recent research has shown that this can be a crucial cancer-prevention technique, as senescence can be induced in the early stages of cancer development and suppress tumour growth. Now research from the MRC Clinical Sciences Centre (UK) with Spanish contribution from the laboratory of Dr. Salvador Aznar Benitah (ICREA Research professor) at the Centre for Genomic Regulation (CRG) has unveiled a new quirk: by secreting a cocktail of factors, senescent cells can spread their retired state to other nearby cells.

The research, published in Nature Cell Biology and led by Jesús Gil (Cell Proliferation Group at CSC), is the product of an international collaboration including groups from Germany, Spain, and the UK, and confirms something that has long been suspected, but never proven: that cells can transmit the senescent state to their neighbours. “We’ve known for more than 20 years that senescent cells secrete a lot of factors, but it wasn’t until about a decade ago that people realised this wasn’t a useless by-product or curiosity, but that it could profoundly influence surrounding cells,” says Gil.

The effects of this collection of secretions, known as the senescence-associated secretory phenotype (SASP), are far from straightforward. “Depending on the cells and environment, the senescent phenotype can promote or suppress tumour development,” says Gil. Clearly any attempts to use this phenomenon in cancer therapies will have to get to grips with this contradictory behaviour, and explain the way in which these secreted elements act.

The question Gil and his team asked of this ‘secretome’ was whether it could cause senescence in other nearby cells. The answer was a resounding yes. “We found that both in vitro [experimental lab cultures] and in vivo [real life tissue], senescent cells are surrounded by normal cells that have adopted the senescent phenotype. It is being transmitted.” With the existence of this ‘paracrine senescence’ confirmed, the next step was to use quantitative proteomics – a technique to analyse in great detail the protein content of a sample – coupled to drug screens to identify that multiple secreted factors were causing senescence transmission.

“We discovered that the inflammasome – a protein multicomplex linked with infections – is also important in regulating the secretome and controlling how the senescent cells act,” reveals Gil. “We have identified factors produced by senescent cells that are responsible for reinforcing the spread. These factors are mostly soluble and easy targets for drugs. That means that we can inhibit or activate it, often using drugs that are already available.” Defining what makes the SASP enhance or suppress tumour development will be crucial to developing drugs to act on it.

A range of prosenescence therapies already being tested aim to maximise the tumour-suppressive power of senescence. In the 1960s, when senescence was first discovered, the idea of paracrine senescence was toyed with but ultimately dismissed. 50 years later scientists have finally proved its existence, and in doing so added a fresh layer of understanding onto this research pathway that could lead to a new breed of cancer treatments.