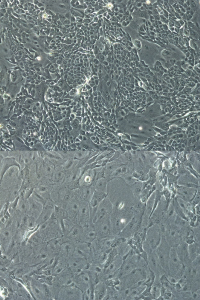 SCIENTISTS DISCLOSE MINUTE-BY-MINUTE DETAILS OF THE BIOLOGICAL CLOCK OF SKIN STEM CELLS
Researchers at the Centre for Genomic Regulation (CRG) describe in detail the cyclic activity of the genes in skin stem cells during the course of a day.

The correct balance of the biological clock of stem cells affects their function, and its disruption causes aging and can lead to predisposition to skin cancer.

Our skin regenerates daily and has to face harmful environmental factors such as sunlight and pathogens. In an article published in the journal Cell Stem Cell, scientists at the Centre for Genomic Regulation (CRG), in Barcelona, have described how the circadian rhythm (internal biological clock) modulates the function of human skin stem cells to achieve optimum regeneration and protection against harmful agents.
Thus, during long periods of exposure to pathogens or UV light, stem cells of the human skin protect themselves. In contrast, during the evening and night, they produce new keratinocyte. Found in the uppermost layers of the skin, keratinocytes, which are dead cells rich in keratin, provide an impermeable protective barrier. Over the course of the night the stem cells regenerate tissue and replace keratinocytes that are damaged or that have been lost during the day.
“Stem cells have some genes that control their biological clock and that determine peaks of activity and intervals of inactivity over 24-hour periods. In this study, we describe how the cells manage to perceive what time of the day it is. This precision allows the stem cells to adapt their activity to the time of day and to its environmental conditions,” explains Salvador Aznar Benitah, ICREA research professor who conducted this study at the CRG and who has recently moved his lab to the Institute for Research in Barcelona (IRB Barcelona).
In 2011, Aznar Benitah and collaborators previously reported on the relevance of circadian rhythms in the regulation of skin stem cells. At that time they found that the cells discriminate between day and night. On this occasion, the researchers have managed to monitor the activity of the stem cells minute by minute. “We now know how the cells know exactly what time it is and how, thanks to this information, they regulate their activity accordingly,” adds the head of the study.
The study also demonstrates that a disruption in the internal biological clock deeply affects the correct function of stem cells and leads to tissue aging and potential predisposition to skin cancer.

Additional information:
The study was performed in the “Epithelial Homeostasis and Cancer” lab, headed by Salvador Aznar Benitah, ICREA Research professor at CRG, and in collaboration with scientists at the EMBL/CRG Systems Biology Research Unit. Aznar Benitah’s team designed the study, coordinated the research and performed the experiments. The systems biology researchers built the algorithm that allowed the identification of those genes that responded to the key activity of the clock followed by stem cells.
This project was funded by an ERC Starting Grant (STEMCLOCK), awarded to Salvador Aznar Benitah, and by the European project PROSPECTS (HEALTH-F4-2008-201648), run by Luis Serrano. In addition, Giomar Solanas received a grant from the AXA Foundation and Kiana Toufighi a fellowship from the Obra Social “la Caixa”.
The study will appear online on Thursday 10 October 2013 and in December’s issue of the printed journal.
Photos can be downloaded here.
For further information and interviews:
Centre for Genomic Regulation (CRG) – Press Office
Contact: Laia Cendrós - Tel. +34 93 316 02 37