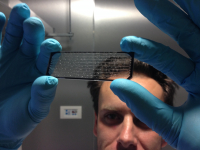 The study, published in the journal Scientific Reports, identifies the gene that causes Opitz C syndrome in the only patient diagnosed with this ultra-rare disorder in Catalonia, which affects only sixty people in the world. The identified mutation in the gene MAGEL2 coincides with the one seen in some patients with another minority disease, the Schaaf-Yang syndrome.

Opitz C syndrome is a genetic disease that causes severe disabilities in patients and has been diagnosed in three people in the Iberian Peninsula, and sixty people in the world. A team led by the professors Daniel Grinberg and Susana Balcells, from the Group on Human Molecular Genetics of the University of Barcelona and the Biomedical Research Networking Center of Rare Diseases (CIBERER) has now identified a gene that causes the Opitz C syndrome in the only patient in Catalonia diagnosed with this severe congenital disease. This new scientific advance is a first step to discover the genetic bases of this syndrome which, so far, does not offer treatment possibilities, prenatal diagnosis or genetic counseling.

The new study, published in the journal Scientific Reports, has the participation of    several researchers at the CRG, including members of the Genomic and Epigenomic Variation in Disease laboratory, the Genomics unit, and the Bioinformatics unit. It also had the participation of John M. Opitz (University of Utah, United States), Giovanni Neri (Catholic University of the Sacred Heart, Italy) and experts at the Department of Clinical and Molecular Genetics of the University Hospital Vall d’Hebron (VHIR).

The genetic bases of this ultra-minority disease, described for the first time in 1969 by John M. Opitz, are still unknown. It is generally thought that its origin is caused by the apparition of dominant -maternally silenced- novo mutations. At the moment, the diagnose is clinical and it is based on the symptomatology presented on patients with different degrees (trigonocephaly, learning disability, psychomotor disability, etc.) and which, in lots of cases, coincides with similar minority pathologies such as the syndromes of Schaaf-Yang, Bohring-Opitz and Prader-Willi.

In the new study, the experts described for the first time, the existence of a novo mutation –p.Q638*- located in the gene MAGEL2 of the only diagnosed person with Opitz C syndrome in Catalonia. Identifying this mutation, found in the Prader-Willi Region on chromosome 15, widens the knowledge horizons on genetics and the possibilities for a diagnosis on these rare diseases.

“The p.Q638* mutation, identified in the gene MAGEL2, coincides with the one described concurrently and independently in a patient with Schaaf-Yang syndrome, a new minoritary disease affecting fifty people in the world. The first cases were described on a scientific bibliography in 2013 by the team of Professor Christian Schaaf, from the Baylor College of Medicine, Houston”, says Professor Daniel Grinberg, member of the Institute of Biomedicine of the University of Barcelona (IBUB), the Research Institute of Sant Joan de Déu (IRSJD) and CIBERER.

“Consequently, from a genetic diagnosis perspective –says DanieL Grinberg- this patient initially diagnosed with Opitz C in Catalonia would correspond to the group of patients with Schaaf-Yang syndrome”

Genetics will define the limits of rare diseases

Identifying the genes that cause a disease is a breakpoint to understand the pathology and set new future therapeutic approaches that improve the quality of life of the patients. In the new study, the teams of the UB and the CRG applied techniques of DNA massive sequencing (exome and genome), a powerful methodology that allows identifying altered genes in each patient.

According to Luis Serrano, director of CRG, “projects like this one show the important role of genomics in the future of medicine and the way on which we diagnose and treat diseases. To understand the diseases and offering not only a diagnosis but also approaches to possible treatments is very relevant in minority diseases. It is a satisfaction for the CRG to contribute with our knowledge and advanced technologies in a project that gives hope to a vulnerable collective” concluded the researcher.

Susana Balcells, tenured lecturer at the UB and also member of IBUB and CIBERER, added “what we can see from a clinical symptomatology view in these kinds of diseases which are so hard to study and diagnose, is far from the initial molecular defect that generates the disease”.

“All these clinical doubts –continued Balcells- will be solved with genetics, which will define the limits of these rare diseases and will ease the scientific consensus on the diagnosis and genetic causes that create them”.

The members of the Group of Human Molecular Genetics of the University of Barcelona and the CRG are currently in contact with the team of Professor Schaaf and three families of patients diagnosed with Schaaf-Yang syndrome in the Iberian Peninsula.

In December 2026, the first author of the study published in Scientific Reports, Roser Urreitzi, researcher of CIBERER and lecturer at the UB, coordinated the meeting between the experts and the affected families. The meeting took place at the Faculty of Biology of the University of Barcelona and was a new encouragement for the collaboration of researchers and affected families in future projects with the participation of the UB, CRG and CIBERER Biobank, in Valencia. This cooperation has also allowed the three patients to be examined by the same clinical expert: the pediatrician Dr Anna M. Cueto, assistant doctor and clinical geneticist at the Department of Clinical and Molecular Genetics of the University Hospital Vall d’Hebron in Barcelona. This is clearly a new progress in the field of ultra-minority diseases.

It should be noted that this research obtained financial support thanks to the crowdfunding PRECIPITA (Spanish Foundation for Science and Technology, FECYT).