Neuroscientists at the Centre for Genomic Regulation (CRG) in Barcelona, Spain, have been striving to better understand the computations achieved by neural circuits controlling odour perception and its motor response in the fruit fly larva. They had recently identified elements of the neural circuitry and now, in a paper published in the eLife journal, they reach a major milestone by proposing the first model for the sensory-motor control of olfactory behaviour in the fruit fly larva.

Imagine a dog that is running after a rabbit. The dog cannot see the rabbit in the tall grass, but it tracks the odour trail left by the rabbit on the ground. While sniffing, it zigzags across the trail. During this process, the dog must solve two fundamental problems of neuroscience: it has to accurately detect changes in the strength of the rabbit’s odour —is the dog getting closer or away from trail— and it has to make the right set of decisions to avoid loosing the trail. “In this study, we have brought the problem of the dog that chases the rabbit to a genetic model organism with a miniature brain: the Drosophila larva. Larvae are incredibly good at ascending odour gradients. If they were dogs, they would catch their rabbit preys in the blink of an eye. Together with several collaborators, my team worked hard for the past 6 years to understand how a relatively simple nervous system can accomplish such a feat” explains Matthieu Louis, group leader of the Sensory Systems and Behaviour laboratory at the EMBL-CRG Systems Biology Research Unit in Barcelona, Spain.

Combining fly genetics and microfluidics, the team thoroughly explored every piece of this jigsaw puzzle, from the analysis of neural activity in single sensory neurons to their control in the navigational behaviour. All these aspects entailed fine engineering. “The development of a new preparation to record the activity of single olfactory sensory neurons took us a couple of years. The first time I observed the neuron responding to a replay of what a larva normally senses during its movement in an odour gradient, I was stunned” says Aljoscha Schulze, one of two first authors of the work. The surprise of the team came from the fact that a single olfactory neuron appeared to be achieving a great deal of information processing. By taking advantage of the strength of the CRG in mathematical modelling, the authors developed a model describing the computations achieved by an olfactory sensory neuron. This model clarifies how a single neuron is capable of keeping track of the rate of change (or derivative) of the stimulus. 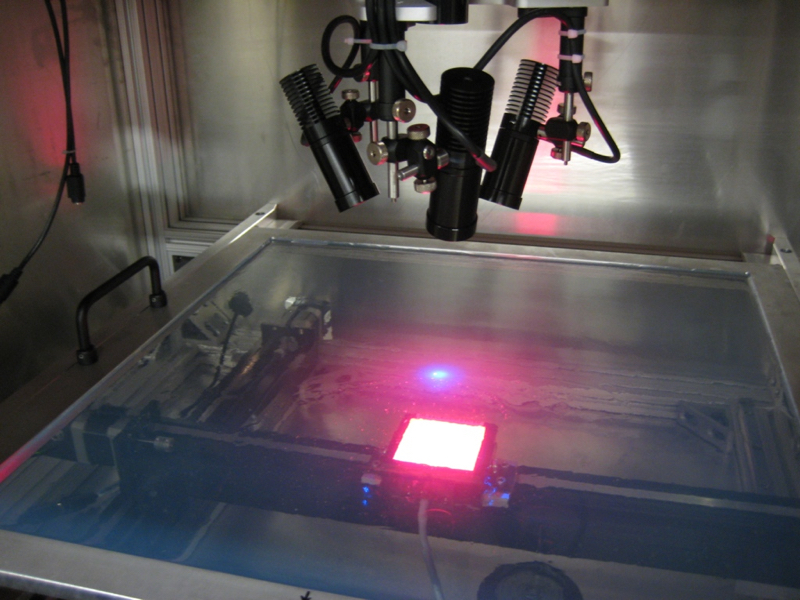 Next, the team asked how the activity of an olfactory sensory neuron controls the navigational behaviour of a larva. As odours are difficult to control due to their diffusion in space and time, the team had the idea of using optogenetics, a method that allowed them to stimulate the larva’s olfactory system with light in place of odours. Also, in collaboration with the Janelia Research Campus and through its Visiting Scientists Program, they built a high-tech machine to monitor the behaviour of a larva in real time and to stimulate its olfactory system by pre-determined light patterns. “Imagine that you could put a small odour delivery device in the nose of a dog. The device would release the odour of a rabbit and excite the dog. Using this device, you would puff increases or decreases in the concentration of the rabbit’s odour. Depending on whether the odour concentration increases or not, you would expect the dog to maintain its direction of motion or to turn. We conducted this experiment in larvae by mimicking the sensory activity induced by attractive odours with light stimulations”, explains Louis. By means of this paradigm, the team was able to characterize the rules that control the behaviour of the larva. When the olfactory neuron of the larva detects a positive gradient (in other words, a temporal change in concentration), the larva keeps running. On the contrary the larva stops when its sensory neuron detects a negative gradient.

Several physicists of the team including the first co-author Alex Gomez-Marin joined their efforts to mathematically model how olfactory inputs are converted into a basic form of behavioural decision: running or turning. The model they came up with was put to the test in naturalistic conditions and led to successful predictions about the behaviour of larvae ascending real odour gradients. “This study has been a challenge from many angles. From a technical point of view, it forced us to invent new tools in order to monitor and classify behaviour in real time. In addition we had to develop a technique to record the spiking activity from the tiny sensory neurons of the larva. It is a prefect illustration of the essential role mathematical modelling plays in neuroscience. Now that we have solved one part of the mystery behind larval chemotaxis, it will be exciting to define whether our model helps explain how mice, rats and dogs track odour trails. These are necessary steps towards an understanding of how the human brain solves similar problems. It is remarkable that we managed to achieve this research in spite of the economical crisis context —we are grateful to Catalonia and Spain for their support. Also, this work was made possible by joining the expertise of our lab and with that of extraordinary co-workers in the US, particularly at the Janelia Research Campus”, concludes Louis.