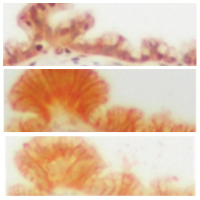 Researchers from the IDIBAPS and the Centre for Genomic Regulation (CRG) have published an article in the Gut journal in which they identify a protein as a possible therapeutic target in the most frequent type of pancreatic cancer. In the study, conducted with animal models and patient samples, they observed that this protein plays a key role in the growth of cancer cells. The studio was coordinated by Cristina Fillat, head of the IDIBAPS’ Gene and Cancer Therapy Group, and Susana de la Luna, head of the Gene signalling and regulation group at the CRG.

Pancreatic ductal adenocarcinoma accounts for 90% of all pancreatic tumours. Although it is a relatively infrequent tumour, it is the fourth cause of death by cancer in the world. It is a very aggressive tumour with a poor prognosis with current treatments. Targeted therapies may offer a new path towards more effective strategies.

The kinase proteins are a group of proteins that regulate different signalling pathways and whose abnormal activation plays a key role in cancer progression. “This group of proteins is one of the most effective types of therapeutic targets in cancer and it has been broadly studied in different types of tumours”, explains Cristina Fillat. The DYRK1A protein is a kinase protein with different functions according to cell type, although its role in pancreatic cancer has not been characterised.

For the study published in Gut, the researchers analysed the expression pattern of the DYRK1A protein in animal models and in patient samples. The protein’s function was determined and its mechanism of action was established.

The results show that DYRK1A presents elevated expression in the pancreatic cancer studied and that this high expression is correlated to the expression of the cancer cell membrane receptor, c-MET. Inhibiting the DYRK1A kinase reduces tumour progression, since cell proliferation is limited. This occurs in both in vitro studies with cell lines and in animal models.

“We have observed that the protein is expressed in early and late tumour stages and is involved in the stabilisation of the membrane receptors, which are key to the proliferation of cancer cells”, explains Susana de la Luna, a CRG researcher that participated in the study.

“Hitherto, MET and EGFR inhibitors have been used, with partial results. This study suggests that the inhibition of DYRK1A would facilitate, through a single molecule, the degradation of c-MET and EGFR, thus reducing their tumorigenic activity”, concludes Cristina Fillat.