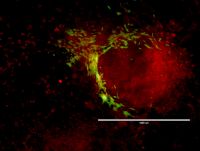 In 2012, John B. Gurdon and Shinya Yamakana were awarded the Nobel Prize in medicine for discovering that adult cells can be reprogrammed into pluripotent ones (iPS); the cells obtained are capable of behaving in a similar way to embryonic stem cells, and hence have enormous potential for regenerative medicine.
However, although there are many research groups around the world studying this process, it is still not completely understood, it is not totally efficient, and it is not safe enough to be used as the basis for a new cell therapy.
Now, researchers at the Centre for Genomic Regulation (CRG) in Barcelona have taken a very important step towards understanding cell reprogramming and its efficiency: they have discovered the key role of the Wnt signalling pathway in transforming adult cells into iPS cells.
"Generally, transcription factors are used to try to increase or decrease the cell reprogramming process. We have discovered that we can increase the efficiency of the process by inhibiting the Wnt route", explains Francesco Aulicino, a PhD student in the Reprogramming and Regeneration group, led by Maria Pia Cosma and co-author of the study that has just been published in Stem Cell Reports.
The Wnt signaling pathway is a series of biochemical reactions that are produced in cells. In frogs or lizards, for example, these reactions are those that allow their extremities to regenerate if the animal suffers an injury. Although in general, humans and mammals have lost this regenerative capacity, the Wnt pathway is involved in numerous processes during embryonic development and cell fusion.
As it is in reprogramming. The researchers have studied how the Wnt route behaves throughout the entire process of transforming cells into iPS cells, which usually lasts two weeks. It is a very dynamic process that produces oscillations from the pathway, which is not active all the time. "We have seen that there are two phases and that in each one of them, Wnt fulfils a different function. And we have shown that by inhibiting it at the beginning of the process and activating it at the end we can increase the efficiency of reprogramming and obtain a larger number of pluripotent cells", indicates Ilda Theka, also a PhD student in Pia Cosma’s group and a co-author of the article.
To artificially control the pathway, the group has employed a Wnt secretion inhibitor, Iwp2, which does not permanently alter the cells, something which other research into reprogramming using different factors has still has not been able to acheive.
They have also seen that the exact moment when the Wnt pathway is activated is crucial. Doing it too early, makes the the cells begin to differentiate, for example into neurones or endodermal cells, and they are not reprogrammed.
"It is a very important and an innovative advance in the field of cell reprogramming, because until now this was a very inefficient process. There are many groups trying to understand the mechanism by which adult cells become pluripotent, and what blocks that process and makes only a small percentage of cells end up being reprogrammed. We are providing information on why it happens", says Theka.
The work opens the way to new advances in regenerative medicine and sheds light on certain types of tumours involving the Wnt pathway. Other labs are also working on ways to increase efficiency when inducing pluripotency in these cells. This is the case of the Haematopoietic Stem Cells, Transdifferentiation and Reprogramming laboratory, led by Thomas Graf, where they work on induced plurioptent stem cells (iPS).
The study was funded by the European Research Council (ERC), the Human Frontier Science Programme (HFSP), the Ministry of Economy and Competitiveness, the Fundació 'La Marató' TV3, the AXA Research Fund and the Marie Curie Ingenium Initial Training Network (ITN) programme.
Article:
Aulicino, F., Theka, Il, Ombrato, L., Lluis, F., and Cosma, M.P. (2014). Temporal Perturbation of the Wnt Signaling Pathway in the Control of Cell Reprogramming Is Modulated by TCFI. Stem Cell Rep. 2, 707-720. DOI: 10.1016/j.stemcr.2014.04.001
Caption: Cells with activated Wnt can no longer be reprogrammed (in green) are located on the periphery; cells that can be reprogrammed are aggregated anad can be seen in the centre of the image (in red)
For further information:
Juan Sarasua - Press Officer - 934160159