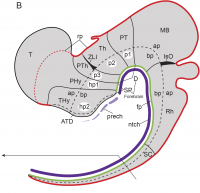 Researchers have made the first detailed map of the regions into which the brain of one of the most closely-related organisms to the vertebrates is divided and which could give us an idea of what our ancestor was like.

A study recently published in PLOS Biology provides information that substantially changes the prevailing idea about the brain formation process in vertebrates and sheds some light on how it might have evolved.

The findings show that the interpretation maintained hitherto regarding the principal regions formed at the beginning of vertebrate brain development is not correct. This research was led jointly by the researchers José Luis Ferran and Luis Puelles of the Department of Human Anatomy and Psychobiology of the UMU; Manuel Irimia of the Centre for Genomic Regulation (CRG), and Jordi García Fernández of the Genetics Department of the University of Barcelona.

The brain of an invertebrate organism, amphioxus (a fish-like marine chordate), whose place in the evolutionary tree is very close to the origin of the vertebrates, was used for the research.

Using the data obtained, researchers have made the first detailed map of the regions into which the brain of this species, which inhabits the seabed and has a very simple life, is divided.

“We set out to understand what the brain of the cephalocordate amphioxus was like. It is a very simple invertebrate organism, albeit very close to us in evolutionary terms, therefore it gives us some insights as to what our ancestors might have been like. Hence, by comparing the territories of the modern vertebrate brain to that of amphioxus, we analysed what might have occurred to lead them to multiply and how such a complex structure was formed in the course of our evolution”, explained the lecturer of the Department of Human Anatomy and Psychobiology of the University of Murcia (UMU) José Luis Ferrán, one of the researchers.

“In this study, we used genoarchitecture as our main experimental framework to determine the regionalization of the amphioxus neural tube and compare it to that of vertebrates. Within this framework, we generated a molecular map of gene expression patterns in amphioxus, whose homologs are known to be involved in establishment and regionalization of the vertebrate brains” explains Beatriz Albuixech-Crespo (Dept Genética, Microbiología y Estadística UB e IBUB), first author of the article.

A new model that dismantles many existing ideas

This work shows that the brain of vertebrates must have formed initially from two regions (anterior and posterior), and not three (forebrain, midbrain and hindbrain), as proposed by the current prosomeric model.

No cerebral cortex or exclusive region giving rise to the formation of the vertebrate midbrain has been detected in amphioxi. However, a common territory inside the forebrain has been found, which they termed DiMes (Di-Mesencephalic primordium), from which both the midbrain and other important structures of the classic forebrain would derive. The DiMes territory yielded three important regions of the vertebrate brain that are used to process sensory information.

“The three classic vertebrate cerebral regions (thalamus, pretectum and midbrain) would have emerged evolutionarily through the action of molecular signalling centres that lead to the expansion and division of a DiMes-like portion”, said Manuel Irimia of the Centre for Genomic Regulation (CRG) of Barcelona, one of the leading investigators of the study. This explains that if the function of these signalling centres, called secondary organizers, is eliminated in vertebrates there remains a single territory similar to the one observed in amphioxi. 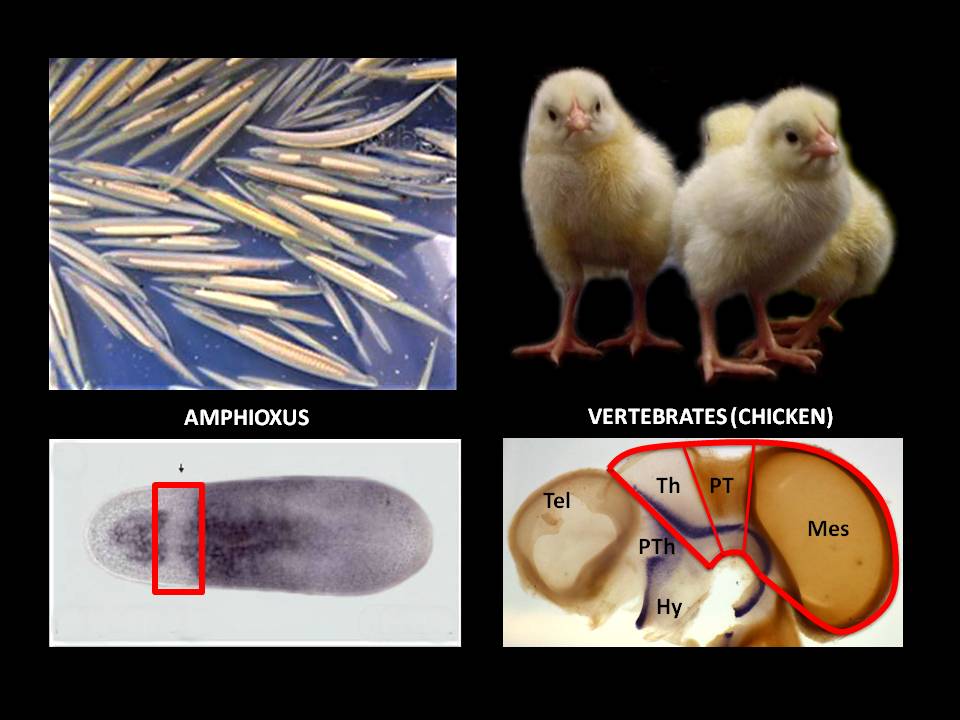 The study of the formation of these three important parts of the brain, which vertebrates use to process visual, auditory or propioceptive information (on the position and movement of the parts of the body), is useful in understanding how the brain has adapted to the environment and is capable of processing information around it.

The idea that these regions were formed independently and that each one of them has given rise to other regions has been proven to be wrong. “The brain has not evolved in isolation, but rather through the interaction of these primitive animals with the environment”, clarified the lecturer from the UMU.

In summary, both brains, amphioxus and vertebrate, are divided into two main regions: anterior and posterior. In amphioxus, the anterior region splits into two domains, whereas in vertebrates it is divided into many more portions, including the three aforementioned regions which, jointly, would correspond to one of the parts of amphioxus.

Knowing the true history of the formation of the brain and the composition of its structures could have a major long-term impact, since it could “help to explain why both the composition and the function of a region are altered. For example, it could lead us to a better understanding of brain-related diseases and why some regions are affected jointly and others are not”, concluded the CRG researcher.

The brain’s structure is the outcome of an evolutionary process

The human brain has undergone an evolutionary process that began some 500 million years ago in the marine animals that lived submerged in the sand and which led to its first central nervous system building plan. This system has been progressively modified and is shared by all modern vertebrates.

The study of the genetic networks that have given an identity to the different brain regions plays a key role in our understanding of how they have evolved. For this reason, genoarchitecture is a powerful tool for describing the regions of the nervous system, cells and their structures, making it possible to determine which genes are active in each territory or region during development and to characterise the limits between them, as well as to define, with the utmost precision, how many different components originate from each region. It is therefore useful in helping us to recognise, in detail, how the human brain resembles that of another vertebrate.