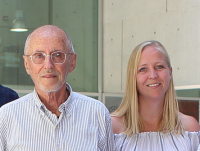 CRG researchers are amongst one of twelve projects selected for the third round of the MIT-Spain ”la Caixa” Foundation seed fund, a joint initiative with the Massachusetts Institute of Technology to promote disruptive research.

Roni Wright and Miguel Beato will use the funding to further research in the field of cancer stem cells (CSCs), with the aim of opening up new avenues of research for new therapeutic targets. The joint project will merge the expertise of MIT researchers studying metakaryotic cells and the CRG researchers knowledge on nuclear ATP synthesis.

Metakaryotic cells were first discovered in MIT in 2003. These cells have hollow bell shaped nuclei appended to rather than enclosed in the cytoplasm. Their "chromosomes" appear to be continuous, joined at telomeres. These cells display “stemness”, an essential characteristic of a stem cell that distinguishes it from ordinary cells.

This stem capacity of metakaryotic cells, sparked the collaboration with Miguel Beato´s lab, who recently showed that CSCs require nuclear ATP generation via the PARP-NUDT5 pathway to maintain their stem expression profile and self-renew. CSCs have been identified in the majority of solid and hematologic cancers, as well as shown to be the initiators of tumor proliferation, metastatic dissemination and colonization.

“We hope that understanding the underlying pathways involved in CSC, specifically within the unique metakaryotic structure in more detail will open up new areas for drug discovery projects for aggressive cancers,” says Roni Wright, a postdoctoral researcher at the Beato lab.

The MIT-Spain ”la Caixa” Foundation seed fund lends its support to projects developed between Spanish universities and research centers and groups at MIT in the United States of America, with the aim of promoting collaboration and transversality in the generation of knowledge.

25 projects from 23 centers were submitted in this third round, which opened in 2019. Four projects were related to health, four to the global economy and the other four in the field of energy.