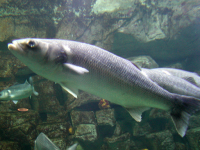 The environmental temperature has effects on sex determination. There are species, such as the Atlantic silverside fish, whose sex determination depends mainly on temperature. And there are other species whose sex determination is written within its DNA but still temperature can override this genetic ‘instruction’.
Previous studies with the European sea bass, a fish whose sex determination depends on a combination of genetic and environmental factors, had shown that starting with a normal sex ratio population –equal proportions of male and females, it was possible to obtain an all-male group just through an increase in water temperature during a critical period of early development.
The most intriguing observation was that effects of temperature were maximum at a moment when gonads were not differentiated nor had they even started to form. Why was this happening, what makes temperature override the genetic component and so early was, until now, a long-standing puzzle.
Now, a research lead by the Spanish National Research Council (CSIC) has found out the answer. The team, lead by Francesc Piferrer, a CSIC professor at the Institute of Marine Sciences, in Barcelona, describes the mechanism which is induced by increased temperatures and triggers aromatase gene silencing.
Aromatase is an enzyme that transforms androgens into estrogens, which are essential for the development of ovaries in all non-mammalian vertebrates. If there is no aromatase there are no estrogens, and without estrogens the development of ovaries is not possible. The research, that has been realized with the contribution of the Center for Genomic Regulation, in Barcelona, is being published this week in PLos Genetics.
Early effects
In the experiment, scientists exposed two groups of European seabass larvae at different temperatures, normal and high temperature, during their first weeks of life.
Results show that high temperature increases the DNA methylation of the gonadal aromatase promoter (cyp19a), which, in turn drives its silencing as its transcriptional activation is inhibited. In the group exposed to high temperature there were genetic females that were only partially affected and yet developed as females. However, there were other genetic females with the highest level of DNA methylation that therefore developed as males because aromatase was fully inhibited.
This is the first time that an epigenetic mechanism linking an environmental factor to a cellular mechanism related to the sexual determination has been described in any animal. Previously, only a similar mechanism had been described in some plants.
As researcher Francesc Piferrer points out, ‘animals are affected very soon, before  differences between females and males become visible in histological samples, which happens on the 150th day of life, and even before the gonads start to form, which happens on the 35th day of life’.
This work explains why a few degrees of temperature rise masculinize these animals, something relevant in a context of global change.
It also explains why many fishes raised on farms are males, since farmers raise larvae in warmer waters in order to accelerate their growth. Piferrer adds that ‘sex determination by temperature is very common in reptiles. It will be interesting to see if a similar mechanism to the one described exists in this group of vertebrates’.
Reference work: Navarro-Martín L, Viñas J, Ribas L, Díaz N, Gutiérrez A, Di Croce L, Piferrer F. “DNA methylation of the gonadal aromatase (cyp19a) promoter is involved in temperature-dependent sex ratio shifts in the European sea bass.” PLoS Genetics, Dec 29 2011.
http://www.plosgenetics.org/doi/pgen.10021002447 (link available after the embargo lifts, at 5 pm US Eastern Time)
For further information:
CSIC
In case you are interested in talking to Francesc Piferrer or any other CSIC authors, please contact Mercè Fernández, CSIC Press Office, Catalonia Delegation, Tel. +34 93 442 65 76 / +34 646 770 466
CRG
In case you are interested in talking to Luciano Di Croce or Arantxa Gutiérrez, please contact Gloria Lligadas, Communication & PR Dept., Centre for Genomic Regulation (CRG), Tel. +34 93 316 01 53