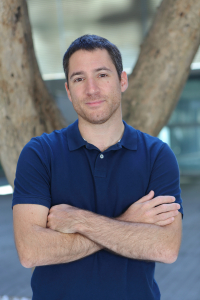 Manuel Irimia, group leader of the Transcriptomics of Vertebrate Development and Evolution laboratory, has been elected EMBO Young Investigator. He is one of the two scientists elected in Spain of the 28 young researchers elected in the latest call.

Selection to the EMBO Young Investigator Programme is recognition of exceptional research and scientific potential. It allows young scientists to boost their own research groups in their early career.

Manuel Irimia obtained his PhD in 2010 at University of Barcelona investigating the origin of vertebrates. After two postdocs at Stanford University and University of Toronto, he joined the CRG in June 2014. He has achieved prestigious grants such as an ERC Starting Grant, and published several papers in top journals. He leads the Transcriptomics of Vertebrate Development and Evolution laboratory at the EMBL-CRG Systems Biology Research Unit.

His research is focused on understanding the roles that alternative splicing and other mechanisms of transcriptomic diversification play in vertebrate embryonic development, and how novel transcript variants have contributed to shape the unique vertebrate development and body plan during evolution.

About the EMBO Young Investigator Programme

Through the Young Investigator Programme, EMBO identifies and supports some of the best researchers under 40 of age who are in the process of establishing their own laboratory in the life sciences. They receive financial and practical support for a period of three years to help them develop skills and connections that will aid them during this career stage.

During their three-year tenure, EMBO Young Investigators receive a range of benefits, including an award of 15,000 euros and possible additional funds to support the establishment of their first independent laboratories.

Laboratory management and non-scientific skills training as well as PhD courses offer the young group leaders and their students the chance to develop professional skills. The scientists also receive access to core facilities at the European Molecular Biology Laboratory in Heidelberg, Germany, and funding for themselves and their group members to attend conferences.