A study of catsharks reveals how alterations in the expression and function of certain genes in limb buds underlie the evolution of fish fins to limbs. The findings are reported by researchers from Tokyo Institute of Technology (Tokyo Tech), the Centre for Genomic Regulation (CRG, Barcelona) and their collaborators in the journal eLife and give new insight into how fish evolved to live on land in the form of early tetrapods.

The first four-legged, land-living creatures – known as early tetrapods – evolved from fish, following the transformation of fins into limbs. This fin-to-limb evolution is a crucial, yet so far unsolved, example of how morphological changes can dramatically alter life on Earth. Now, researchers at Tokyo Tech and CRG, together with scientists across Japan and Spain, have revealed how genetic alterations governing the patterning of skeletal structures in fins may have led to the evolution of limbs and the rise of early tetrapods.

The forelimbs of tetrapod evolved from the pectoral fins of the ancestral fish. These fins contain three or more basal bones connected to the pectoral (shoulder) girdle. However, the most of basal bones located in the anterior side (i.e. the thumb side in the human limb) were lost in early tetrapods, and only the most posterior bone remained as the “humerus (i.e. the upper arm of humans)”.

Pectoral fins of catsharks also contain three basal bones as seen in the ancestral fish (Fig. 1a). Thus, the team examined the fin development of catsharks, and revealed that there was a shift in the balance of anterior (thumb side) and posterior (pinky side) fields in their fin buds compared to that in mouse limb buds (Fig. 1a, below).

To determine whether shifts in the balance of anterior and posterior field occurred during fin-to-limb evolution, Onimaru, postdoctoral researcher currently at Sharpe's lab (CRG), and his colleagues carefully compared the expression, function and regulation of genes involved in anterior-posterior patterning in pectoral fins of catsharks, with those of mice. They found that, in pectoral fin of catshark embryos, Gli3 expression was intensified posteriorly, and the balance of the anterior and posterior fields was shifted (Fig. 1b, below). This indicates that a major genetic shift (posteriorisation) occurred as tetrapods evolved. 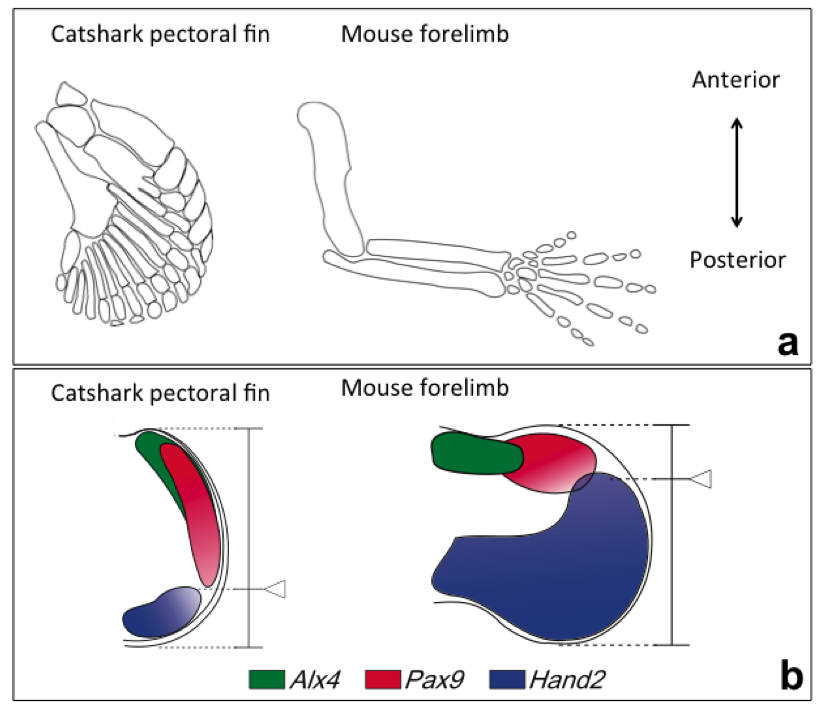 Furthermore, they found that the catshark genome lacked a sequence found in mice and other tetrapods, which is responsible for preventing Gli3 expression in the posterior part of tetrapod limb buds. As a known repressor, the restriction of Gli3 to the anterior may result in the loss of skeletal structure in this domain. When the researchers experimentally “posteriorised” pectoral fin buds of catsharks, the fins lost anterior skeletal elements, and showed a single bone connected to the pectoral girdle, as seen in fossil Tiktaalik pectoral fins (Fig. 2). 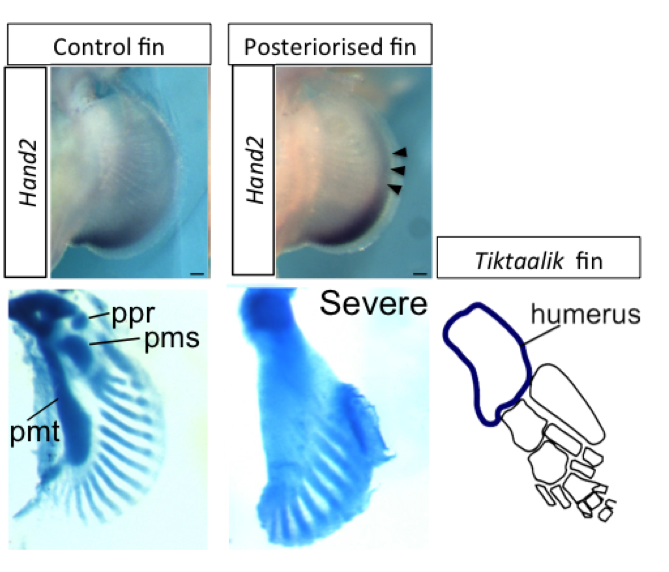 Figure 2: “Posteriorised” catshark fins. In control fins (left), Hand2 is expressed in the posterior margin, and three basal bones (ppr, pmr, pmt) are connected to the pectoral girdle. Whereas in “posteriorised” fins (middle), expression of Hand2 is extended anteriorly (arrowheads). In the severe case, a single basal bone is connected to the body trunk and number of distal radials is reduced. Interestingly, a fossil sarcopterygian Tiktaalik also had a single basal bone (humerus).

These results suggest that one of the key genetic events during the fin-to-limb evolution was a shift of the balance of the anterior and posterior fields (a “posteriorisation”) and loss of anterior skeletal elements (Fig. 3). Further research involving genome-wide studies, particularly into the role of Gli3, will help explore these results more fully.

Figure 3: A model of the fin-to-limb evolution. A gradual shift of the balance of anterior (green) and posterior (blue) field might have led to the evolution from fins into limbs.

During limb development, the embryonic cells are allocated and determined for specific roles and positions, gradually building a correctly-formed limb. Part of this process includes so-called ‘anterior-posterior patterning’ – the determination of where individual parts of the limb bud develop along the anterior-posterior axis (thumb-pinky axis).

A key anterior-posterior patterning gene is Gli3 – a transcriptional factor which is known to control genes involved in creating fingers and toes, although little is understood about its full role in skeletal patterning of fins and limbs. Given its link to skeletal patterns, determining the exact role of Gli3 is an important future goal for scientists, and may prove invaluable in understanding fin-to-limb evolution.

Methodology
To determine how fins evolved into the limbs of four-legged land-living creatures, Mikiko Tanaka and her team, from Tokyo Tech, used the latest genetic technologies to precisely track the expression, function and regulation of key anterior-posterior patterning genes in the fin/limb buds of both catshark and mouse embryos. They were then able to compare the fish and tetrapod genetic patterns, and uncovered a key difference between them in terms of fin/limb development.

Future work
Future work involving systematic genome-wide studies would help expand on the current research. As mentioned, little is known about Gli3 regulation, even in mice, and so systematic studies of the precise genetics behind the development of limb skeletal structure is needed.

About Tokyo Institute of Technology
As one of Japan’s top universities, Tokyo Institute of Technology seeks to contribute to civilization, peace and prosperity in the world, and aims at developing global human capabilities par excellence through pioneering research and education in science and technology, including industrial and social management. To achieve this mission, we have an eye on educating highly moral students to acquire not only scientific expertise but also expertise in the liberal arts, and a balanced knowledge of the social sciences and humanities, all while researching deeply from basics to practice with academic mastery. Through these activities, we wish to contribute to global sustainability of the natural world and the support of human life.
Website: http://www.titech.ac.jp/english/

About Centre for Genomic Regulation
The Centre for Genomic Regulation (CRG) is an international biomedical research institute of excellence, founded in December 2000 and based in Barcelona (Spain). The mission of the CRG is to discover and advance knowledge for the benefit of society, public health and economic prosperity. The breadth of topics, approaches and technologies at the CRG permits a broad range of fundamental issues in life sciences and biomedicine to be addressed. Nearly 380 scientists from 42 different nationalities work at the CRG on multidisciplinary projects, focusing on a broad range of topics: stem cells, epigenetics, cellular and developmental biology, genomics, cancer, systems biology, to name a few. Researchers receive strong support by cutting-edge technological platforms. Over 200 publications in high quality journals are published every year, and researchers are also active in facilitating the transfer of new basic findings into products for society.

The CRG is devoted to excellent training at all the stages of a career in life sciences. The CRG advanced training programme embraces training-through-research, hands-on and theoretical courses, conferences and seminars with leading guest speakers and internal data and journal clubs, to empower researchers with new skills, knowledge and abilities. The institute also runs Courses@CRG, a series of courses open to the scientific community and focusing on a wide range of topics combining theory and hands-on sessions. Career development and transferable skills are also provided through tailor-made training. The CRG runs a successful international PhD and Postdoctoral Programme (more than two hundred PhD students and postdocs), as well as a Summer Internship Programme, providing undergraduate students with the opportunity to carry out a research project during the summer period.
Website: http://www.crg.eu/