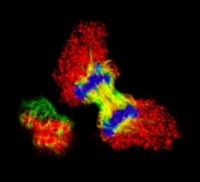 Barcelona, November 21, 2012. Cancer is a complex disease and only thanks to advances in genomic techniques have researchers begun to understand, at a cellular and molecular level, the mechanisms which are disrupted in cancer cells. This knowledge is a key prerequisite for developing effective treatment strategies.
One clear example of this is breast cancer. It has long been known that hormones such as oestrogen and progesterone encourage the proliferation of cancer cells. Because of this, one of the most common treatments is the administration of hormone receptor blockers. The block, however, affects all the cells of the body not only the cancer cells, and causes a number of side effects in patients. Additionally, most cancers develop resistance after time and growth continues despite anti-hormone therapy. In order to treat these patients it is necessary to understand the mechanisms that trigger proliferation, in order to inhibit them.
The scientists from the Chromatin and Gene Expression lab at the CRG, led by Miguel Beato, are dedicated to understanding how hormones activate cell division in breast cancer, focusing on regulating the expression of the genes that control the cell cycle.
Hormone receptors are transcription factors that bind to DNA sequences in the vicinity of the genes they regulate. But the DNA of the genes is packed into a dense structure known as “chromatin”, which is considered a barrier preventing the access of transcription factors to genes. Therefore the chromatin must be decompacted for the transcription factors to activate the target genes, express RNA and subsequently translate them into proteins that stimulate cell proliferation. This is where progesterone, via its receptor, activates various enzymes initiating chromatin opening.
In the study published on September 1 in the journal Genes & Development, the researchers looked at the role of an enzyme, PARP-1, which is primarily responsible for the repair of cuts in DNA. “We have found a novel mechanism of PARP-1 activation, via another enzyme, CDK2, which phosphorylates and activates PARP-1, essential for chromatin opening and gene regulation.”, explains Roni Wright, first author of the study. Wright is a postdoctoral researcher in Beato’s lab. She believes that much remains to be discovered in this area of research. “This experiment was conducted on cell lines, but now we have to do it on real, patient cells to see if their behaviour is the same”, adds the researcher.
How do we know how the proliferation of cancer cells is controlled?
Gene regulation (how genes activate and deactivate) is the key to the overall understanding of how our genome works and how it is altered in disease. “It is important to discover the mechanism by which genes are activated around chromatin”, explains Miguel Beato. The chromatin packs the DNA at several levels, the first being the “nucleosomes”, which help stabilise the DNA chain. “It was thought that the chromatin structure was not relevant to explaining how genes turn on and off, but we have discovered that it is crucial,” adds Beato.
The second study, published online on November 21, 2012 in the journal Molecular Cell, addresses this issue. Firstly, all the genes that progesterone activates or represses in breast cancer cells were identified. Then the researchers identified which DNA sequences recognise the progesterone receptor in the genome. They found that these represented only a small proportion of the possibilities, making them think that interaction with DNA was not sufficient. It was necessary for the sequences which bind to the receptor to be incorporated into nucleosomes, which also provide interaction sites.
“It appears that the structure of chromatin is fundamental for determining the activation or repression of genes.”says Cecilia Ballaré, first author of the paper.
The researchers believe that the only way to create increasingly specific and effective cancer treatments is by studying the role of all the elements that regulate gene expression and cell proliferation in response to hormones. “Knowing the exact way progesterone affects the proliferation of cancer cells may help develop more specific treatments that fight only cancer cells and thus produces fewer side effects”, adds Ballaré.
References: