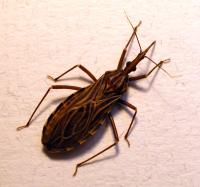 A new report in the Proceedings of the National Academy of Sciences provides information about the evolution and molecular biology of Rhodnius prolixus, a major vector of Chagas disease, an illness that affects approximately 7 million people worldwide and a major cause of morbidity and mortality in the Americas. The R. prolixus insects, commonly referred to as kissing bugs, are a type of nocturnal, blood-sucking insect called triatomine bugs that feed on animals and people at night. The results from the report should boost our understanding of the transmission of a life-threatening parasite and may lead to the development of innovative insect control methods.

Researchers at Centre for Genomic Regulation (CRG, Spain), the McDonnell Genome Institute at Washington University (MGI), the Centers for Disease Control and Prevention (CDC), the Universidade Federal do Rio de Janeiro (UFRJ, Brazil), the Fundação Oswaldo Cruz (FIOCRUZ, Brazil) and other institutions sequenced the genome of R. prolixus, generated assembled sequences covering 95% of the genome, and completed comprehensive genomic analyses. The authors report large and unique expansions of different gene families that are related to chemoreception, feeding, and digestion. Each of these expansions may have facilitated the insect’s adaptation to a blood-feeding lifestyle. This report describes the first genome sequence of a nondipteran insect vector of an important human parasitic disease.

Other unique features of R. prolixus described by the authors include a peculiar immune network and a “silent” relationship between the insect host and the parasite that causes Chagas disease. These insights into the insect and parasite relationship, specifically into how the insect retains or eliminates parasites, may lead to novel approaches to control or eliminate the disease.