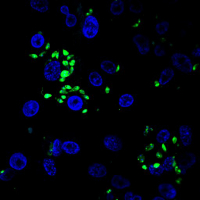 Leishmaniasis is an important human and veterinary disease caused by Leishmania parasites that affect 12 million people in over 98 endemic countries. The disease is now emerging in Europe due to climate change and massive population displacement. The parasite is known to rapidly adapt to novel environments with important consequences for disease outcome. It has therefore been recognized as an emerging public health threat for the EU.

In a paper, published in Nature Ecology & Evolution, scientists from the Institut Pasteur in Paris and the Centre for Genomic Regulation (CRG) in Barcelona, in collaboration with teams at the Institute of Tropical Medicine Antwerp (ITM) and the University of Montpellier, have now demonstrated that Leishmania adaptation results from frequent and reversible chromosomal amplifications. Such variations, named aneuploidies, are similar to those occurring in many cancer types.

These findings represent an important step towards a better understanding of human Leishmania infection, with relevance to parasite drug resistance, pathogenicity, and tissue tropism. This novel insight into Leishmania genomic instability should pave the way for the identification of parasite drug resistance mechanisms in clinically relevant settings and help discover biomarkers with diagnostic and prognostic value.

Leishmaniasis is among the five most important parasitic diseases worldwide, with an estimated 350 million people at risk of infection. The disease causes a spectrum of clinical manifestations ranging from disfiguring cutaneous to fatal visceral forms, which results from infection by different species of Leishmania parasites. These unicellular parasites adapt to a remarkable range of hosts. They grow as extracellular parasites inside phlebotomine sand flies that transmit Leishmania to variety of vertebrates, such as rodents, dogs, and humans, where they grow inside immune cells, notably macrophages, causing severe pathologies that may lead to death.

Leishmaniasis is one of the most neglected diseases and as a consequence attracts limited attention. There is no human vaccine and only few treatments are available, all of which show one or more important limitations with respect to administration, toxicity or cost. Even worse, a hallmark of Leishmania biology happens to be its capacity to adapt to a variety of unpredictable fluctuations inside its human host, notably pharmacological interventions, with important consequences on disease outcome as demonstrated by the emergence of drug resistant clinical isolates.

To identify the genetic mechanisms that drive Leishmania genomic adaptation, scientists from the Institut Pasteur in Paris and the Centre for Genomic Regulation (CRG) in Barcelona, in collaboration with teams at the Institute of Tropical Medicine Antwerp (ITM) and the University of Montpellier have developed novel techniques for comparative genomics, based on next generation sequencing and in-silico analyses. Their work, which is published in Nature Ecology and Evolution, shows for the first time the existence in Leishmania of a relation between changes in chromosome copy number and the selection of new alleles important for parasite survival.

The most surprising aspect of this work is the observation that Leishmania manages to combine allele selection with the maintenance of a high genetic diversity. Normally these two processes should be mutually exclusive, and one would expect a parasite under strong selection to rapidly lose its genetic diversity. In Leishmania, however, the very frequent chromosomal duplications make it possible to combine both. Indeed, the parasite maintains its diversity by allowing the same combination of alleles to be selected simultaneously in genetically diverse individuals.

Gerald Späth, Director of the Molecular Parasitology and Signaling Unit at the Institut Pasteur in Paris, who directed the experimental part of this study, comments: ”Basic, applied, and clinical research in Leishmania is nearly exclusively conducted using parasites from long-term culture. Our study shows that the parasite genome evolves very fast under laboratory conditions. This needs to be considered when studying the parasite biology and searching for new biomarkers, drugs, or vaccine candidates. The future of Leishmania research should be conducted in a more integrative fashion, considering the complex genetic interactions between parasite, vertebrate host and insect vector, and under clinically relevant conditions, for example using parasites from short-term culture or applying direct tissue sequencing”.

Cedric Notredame, Senior Principal Investigator at the Centre for Genomic Regulation in Barcelona, who directed the comparative genomics part of this study explains: “The notion that gene amplification is a highway for adaptation has long been around, but our work shows that in Leishmania, evolution has scaled up this mechanism to the point of making it an essential part of the parasite life cycle. An increasing body of work shows that similarly complex aneuploidy variations play a role in some forms of cancer and we think that the rapid accumulation of NGS genomics data combined with novel in-silico techniques - like the ones developed in our study - will soon lead to a better understanding of the relationships between aneuploidy and allele selection”.

Professor Jean-Claude Dujardin from ITM points out: “It took us more than five years to collect an unprecedented sequencing data set from clinical isolates in the Indian sub-continent and publish a first analysis last year. A great feature of modern science is that all sequencing data need to be made public, which allows new collaborations and studies like ours.  It also allowed the establishment of a new alliance between ITM, Institut Pasteur and CRG in the fight against infectious disease.”

The results of this original study are highly relevant to other human diseases that dependent on genome instability, such as fungal infection or cancer, and open new venues for anti-leishmanial drug discovery using host-directed strategies that target the parasite’s metabolic dependence on the host cell, thus preventing the adaptive evolution of drug resistant parasites.

Based on the results published in this paper, and with the aim to study the biology and epidemiology of Leishmania in a clinically more relevant context, Dr. Gerald Späth established the international consortium ‘LeiSHield’ (www.leishield.org), that coordinates a concerted effort between partner teams of the Institut Pasteur International Network and beyond, which was initially supported by a seeding fund from the Institut Pasteur International Direction, and is now funded by a 1.7 million euro grant from the EU H2020 program.