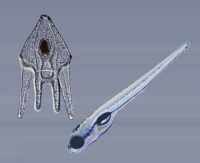 A neutral genetic mutation—a fluke in the evolutionary process that had no apparent biological purpose—that appeared over 700 million years ago in biological evolution could help explain the origin of complex organs and structures in human beings and other vertebrates, according to an article published in Nature Communications by a team led by CRG group leader Manuel Irimia, university professor Jordi García-Fernàndez, of the Faculty of Biology and the Institute of Biomedicine of the University of Barcelona (IBUB), and Maria Ina Arnone (Anton Dohrn Zoological Station, Italy).

Specifically, this mutation, which likely occurred very early in evolution after the separation of our group from that of sea anemones, affected a gene of the Fgfr (fibroblast growth factor receptors) family. Curiously, this genetic change triggered, millions of years later, the connection between two gene regulatory networks (those controlled by ESRP and by Fgfr), which became key for the origin of many vertebrate organs and structures (lungs, forelimbs and inner ear).

The Nature Communications article, whose lead author is Demian Burguera (CRG and UB-IBUB), took their approach from the field of evolutionary developmental biology (evo-devo). This is a relatively new paradigm in the study of evolution, which focuses on comparing the embryonic development of multiple living beings to understand how their adult forms have changed giving rise to new species.

From chance mutation to formation of organs in vertebrates

A gene can code for different proteins—with diverse functionality—through the genetic mechanism of alternative splicing (the cutting and rejoining of genes). In some human cell types, this process is controlled by a family of regulatory proteins called ESRP. They act as a molecular switch: when these regulatory proteins are present, a group of genes involved in morphogenesis and cell-cell interactions generate specific protein variants; when they are absent, different protein variants are produced. And this molecular switch controls how cells behave and interact with their neighbors during embryonic development. However, the evolutionary importance of this mechanism was unknown.

“We have studied the functions of ESRP genes during the embryogenesis of various animals. Our results suggest that these genes were part of an ancient genetic machinery, shared by animals as diverse as fish, sea urchins and ourselves, that controls the integration of certain cells into the linings of developing organs. This is a fundamental step in the formation of some organs, and it is the reverse of a process that is central to cancer metastasis, by which cells leave the tumor to colonize other parts of the body" explains Manuel Irimia, group leader at the Centre for Genomic Regulation (CRG).

The article published in Nature Communications shows how the same regulatory genes have been used to generate different organs and biological structures in living beings during the evolutionary process. In the same vein, the article describes how a chance “mistake”—an apparently meaningless mutation that took place over 700 million years ago—became the molecular driver for complex morphological developments in a number of vertebrates (including the human species).

“Clearly, the most exceptional result of the work is the proof of how important serendipity is for evolution. It is surprising to find that a single gene (ESRP), through its ancestral biological role (cell adherence and motility) has been used throughout the animal scale for very different purposes: from the immune system of an echinoderm to the lips, lungs or inner ears of humans,” states professor Jordi Garcia-Fernàndez, of the University of Barcelona’s Department of Genetics, Microbiology and Statistics and the IBUB.

“The new discovery confirms how versatile biological evolution is: the same foundation and gene tools can be used to build a wood cabin or a skyscraper,” concludes professor Garcia-Fernàndez.