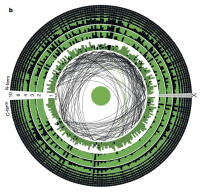 By studying more than 50,000 variants of a jellyfish gene, researchers at the Centre for Genomic Regulation in Barcelona (Spain) have drawn a detailed picture of how changes in that gene affect its function. The study, carried out in collaboration with researchers in Russia, the US, Israel and Spain, is published in the journal Nature.

Made up of a four-letter DNA code*, genes are the ‘recipes’ cells use to make molecules such as proteins, which are the building blocks of life. Changes in a gene can affect the characteristics of an organism. For example, genetic variations linked to pigmentation genes affect eye or hair colour in humans, while other changes can cause diseases such as cystic fibrosis or cancer. On a grander scale, genetic changes are the fuel for evolution, leading to big and small differences between species over time.

Until now, researchers have tended to only study single ‘letter’ changes (mutations) in a gene, observing the effect of the alteration on the resulting protein. But in real life, organisms have many DNA changes and variations scattered throughout their genes, which can all interact together to affect the outcome.

Now Fyodor Kondrashov, ICREA research professor and leader of the Evolutionary Genomics lab at the Centre for Genomic Regulation (CRG), and his team have scanned through thousands of different versions of a jellyfish gene encoding a Green Fluorescent Protein (GFP)**, analysing the effect of one, two or multiple mutations on the fluorescence levels of the resulting proteins. Their results are published online today (11th May 2016) and on 19th May in the print issue of Nature.

Rather than having to examine thousands of jellyfish, the researchers made mutations in a version of the GFP gene that had been transferred into lab bacteria called E. coli, which produce the altered fluorescent protein as they grow. Some changes don’t affect the level of fluorescence of the protein, while others make it dimmer or get rid of the glow altogether.

Thanks to advances in DNA sequencing – the technology that allows scientists to ‘read’ the genetic code – Kondrashov and his team were able to find out exactly what changes had been made within every altered version of the GFP gene and link that back to any changes in fluorescence of the protein. Surprisingly, they found that some combinations of mutations had a more pronounced effect on the fluorescence than might have been predicted from the effect of each single change by itself.

Finally, using computer modelling, the researchers were able to construct a ‘fitness landscape’, mapping how multiple combinations of changes in the GFP gene interact to affect the brightness of the resulting protein (see accompanying video***). The genetic changes in the ‘peak’ still produce brightly fluorescent GFP, while those around the edges do not.

“The fitness landscape is an abstract concept that simplifies our thinking of how the characteristics of an organism come from its underlying genetic makeup, Kondrashov explains. “This is the first time anyone has been able to generate real data to graphically represent this concept, looking at combinations of genetic changes rather than just single mutations.”

Postdoctoral researcher Karen Sarkisyan, first author on the paper, says, “We were really surprised when we finally had a chance to look at exactly how the interactions between mutations occur. We also did not expect that almost all the mutations that are only slightly damaging on their own can destroy fluorescence completely when combined together.”

Kondrashov believes this a first step towards understanding how changes in the DNA (genotype) of an organism combine together to affect its traits, characteristics and even diseases (phenotype). He says, “Our research takes us some way towards being able to predict the effects of different combinations of mutations. If we can understand and draw fitness landscapes for genes, cells and even one day for whole organisms, we would know so much more about biology – what combination of mutations causes cancer or other diseases, or the evolutionary changes that make a characteristic like the trunk of an elephant.”