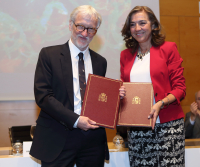 Spanish government and EMBL sign agreement for new site dedicated to tissue biology and disease modelling. EMBL and CRG will strengthen links further now that EMBL will be physically present on site and thanks to the establishment of the new CRG-EMBL Local Partnership until 2021.

At a ceremony in Barcelona today, EMBL and the Spanish government, as represented by the Ministry of Economy, Industry and Competitiveness (MINECO), signed an agreement for a new EMBL site to be hosted in the city. The ceremony was also attended by the Catalan Government, represented by the Ministry of Business and Knowledge, and the Centre for Genomic Regulation, which have supported this initiative from the very beginning.

EMBL Barcelona will be located on the campus of the Barcelona Biomedical Research Park (PRBB), and researchers at the site will focus on how tissues and organs function and develop, and how preventing failures in those processes can lead to tackling disease. Alongside cutting-edge research, the site will house state-of-the-art imaging facilities able to extract complex 4D information from tissues and organs.

“Tissue biology and disease modelling is an exciting field, where we expect breakthroughs in fundamental research and also in terms of future medical applications. EMBL Barcelona will be in a unique position to lead those advances,” says EMBL Director-General Iain Mattaj. “The site will be one of the few places in the world where scientists can access state-of-the-art microscopy and modelling technologies specifically designed for studying tissues.”

Scientists at EMBL Barcelona will tackle key challenges around human health. Molecular biology, genomics, and structural biology have been key strains of EMBL success over the last two decades but many health issues like cancer, diseases of the immune system and birth defects involve flaws in how cells arrange themselves and interact at the tissue level. Research in tissue biology completes EMBL approach of the life sciences and it raises the exciting prospect of being able to control and regenerate tissues and organs, and to perform effective tissue engineering – approaches that could provide new means of treating such conditions.

EMBL is one of the world’s leading research institutions and Europe’s flagship laboratory for the life sciences. It is an intergovernmental organization supported by more than 20 member states. EMBL performs fundamental research in molecular biology, studying the story of life. The first new EMBL site to be established in almost 20 years, EMBL Barcelona will be the institute’s 6th site – after Heidelberg (Germany), Hamburg (Germany), Grenoble (France), Hinxton (UK) and Monterotondo (Italy). It is expected to begin operations in 2017.

“This agreement to host EMBL in Barcelona is testament to the Spanish government’s commitment to support excellent science and to capitalize on the rapid development of internationally competitive biomedical research,” says Spanish Minister Luis de Guindos. “The PRBB campus and the region host a vibrant community, conducting pioneering science, so this is the perfect setting for EMBL’s new site while placing Spain at the forefront of research in the life sciences.”

Researchers at EMBL’s new site will work in a highly collaborative, interdisciplinary and international environment, benefiting from the long-lasting relation with the Centre for Genomic Regulation (CRG) and the close collaboration with other institutes on campus, as well as opportunities across EMBL sites and with other partners throughout Europe and beyond.

“At CRG we have a long-standing partnership with EMBL since 2006, and we’ve already made significant discoveries as a result of our collaboration,” says Luis Serrano, Director of CRG. “We will strengthen those links further now that EMBL will be physically present on site and thanks to the establishment of the new CRG-EMBL Local Partnership until 2021.”

The EMBL-CRG partnership has been the seed for the forthcoming outstation by providing critical mass and an appropriate collaborative scientific environment. EMBL Barcelona springs from the excellent results obtained from the activities carried out by this partnership and from the strong commitment to support this new site by both the Spanish and Catalan Governments, which provide funding for the Local Partnership and the spaces at the PRBB for the EMBL outstation respectively.

“Catalonia has an ambitious and successful R&D system and hosting EMBL in our country represents a landmark achievement. EMBL researchers will benefit of a science hub including research centres, universities and large scientific infrastructures in a unique location,” explains Jordi Baiget, Minister of Business and Knowledge of the Catalan Government and President of the CRG Board of Trustees.

About EMBL
EMBL is Europe’s flagship laboratory for the life sciences. We are an intergovernmental organisation established in 1974 and are supported by over 20 member states.
EMBL performs fundamental research in molecular biology, studying the story of life. We offer services to the scientific community; train the next generation of scientists and strive to integrate the life sciences across Europe. We are international, innovative and interdisciplinary. We are more than 1600 people, from over 80 countries, operating across five sites in Grenoble (France), Hamburg (Germany), Heidelberg (Germany), Hinxton (UK) and Monterotondo (Italy). Our scientists work in independent groups and conduct research and offer services in all areas of molecular biology. Our research drives the development of new technology and methods in the life sciences. We work to transfer this knowledge for the benefit of society.

About the Centre for Genomic Regulation (CRG)
The Centre for Genomic Regulation (CRG) is an international biomedical research institute of excellence, founded in December 2000 whose mission is to discover and advance knowledge for the benefit of society, public health and economic prosperity. The CRG believes that the medicine of the future depends on the groundbreaking science of today. This requires an interdisciplinary scientific team focused on understanding the complexity of life from the genome to the cell to a whole organism and its interaction with the environment, offering an integrated view of genetic diseases. Research at the CRG falls into four main areas: gene regulation, stem cells and cancer; cell and developmental biology; bioinformatics and genomics; and systems biology.

With 400 scientists from 43 countries, the CRG excellence is based on an interdisciplinary, motivated and creative scientific team that is supported by high-end and innovative technologies. Over 200 publications in high quality journals are published every year, and researchers are also active in facilitating the transfer of new basic findings into benefits for health and economic value for society.

The CRG is one of the Spanish institutes awarded with the Severo Ochoa grant of excellence, and has been ranked by the Scimago Institutions Rankings 2015 as the 6th best medical research institute worldwide, according to the Q1 indicator, within the health sector.