Home > The effects of genetic variation in space and time

The effects of genetic variation in space and time

The effects of genetic variation in space and time 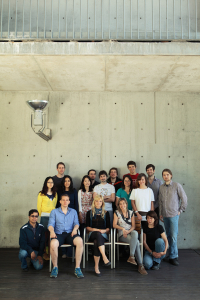 CRG researchers describe in a paper published in Nature that many genetic differences between individuals influence the dynamic patterns of how genes are switched on or off during development. The research will contribute to the understanding of how the differences in our genomes affect dynamic processes such as disease progression.
The genome sequences of two humans differ at millions of positions. Most of these differences lie outside of genes, and so have the potential to influence how genes are switched on or off, not the structure or functions of the proteins or RNAs that they encode. A major goal in genetics is to understand the impact of these genetic differences (variants) outside of genes. This is particularly important given that most genetic variants associated with human diseases are of this type.
In a paper published in the 9th January 2014 issue of Nature, CRG researchers Ben Lehner and Mirko Francesconi describe an efficient experimental and computational design to study how genetic differences in a genome influence the expression of all genes in both space and time.
Applying the approach to the model nematode C. elegans, they reconstruct how the genetic variation between two individuals changes gene expression in different organs and tissues throughout 12 hours of the animal's development.
They find that genetic variants can act as timers, amplifiers and switches, altering quantitatively how genes are turned on or off.  In addition, they show that some of the effects of genetic variation are limited to a particular time point or to a particular tissue, whereas others have effects throughout time or in multiple tissues.
Although the method was tested in a model organism, the method should also allow the analysis of how genetic variation between individuals influences other dynamic processes, for example development, physiology, or disease progression in humans.
“We think that it will change the way that some genetic studies are performed and will open up the genetic dissection of complex dynamic processes such as development and disease progression”, states Ben Lehner, principal investigator of this study, CRG group leader and ICREA research professor.
“Our method allows us to describe how natural genetic variation affects how genes are switched on or off throughout a continuous period of time and in different tissues”, adds Mirko Francesconi, first author of the work published in Nature and postdoctoral researcher in Ben Lehner’s Lab.
“Ignoring dynamics not only misses many relevant consequences of differences in our genomes but it can also lead to very misleading interpretations of the effects of these differences”, adds Mirko Francesconi. “So, from now on, we have a new player to consider (dynamics) and a new method for its analysis.”
Thanks to this new contribution, we should be able to better map out how the differences in our genomes influence many different dynamic processes including how we develop and how we age.
Reference article: Francesconi M, Lehner B. The effects of genetic variation on gene expression dynamics during development. Nature. 9 January 2014 2014. DOI: http://dx.doi.org/10.1038/nature12772