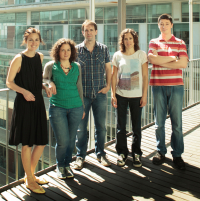 CRG RESEARCHERS DESCRIBE THAT SENESCENCE IS A NORMAL PROCESS IN THE EMBRYO, AND IS NOT ONLY LINKED TO AGING AND CANCER

Senescence is a state by which cells limit their proliferation in response to stress. This cellular state has been historically described in aging and cancer. Now, researchers at the CRG and CNIO in Spain have described for the first time, that this state is not exclusively related to stress and tumour proliferation but that it is also needed in a normal setting during embryonic development.

“For the first time, these studies clearly show that senescence is a programmed developmental mechanism. This new description helps us to understand the role and significance of senescence as a normal cellular process”, explains Bill Keyes, head of the Mechanisms of Cancer and Aging laboratory at the CRG. “Our work demonstrates that in the embryo, the senescent cells are required, and through their normal secretory function, instruct tissue growth and patterning”, adds Dr. Keyes.

Keyes and collaborators describe senescence as a fundamental part of the biology of two major signalling centres in the embryo that helps to control normal limb and nervous system development. Likewise, the CNIO study led by Manuel Serrano, and postdoctoral researcher Daniel Munoz-Espin, identified identical processes in two other tissues, in the developing kidneys and ear.

Both studies then go on to show how the coordinated removal of senescent cells by macrophages plays a key role in the remodelling of the developing tissues, a process that is required for normal patterning. Interestingly, the tissues where the researchers describe the occurrence of senescence are among those most frequently affected by congenital birth defects, suggesting that an investigation of the mechanisms that regulate senescence in the embryo might help to explain the causes of some developmental abnormalities.

Thanks to this new perspective of senescence, the scientists suggest that senescence related to aging and cancer is an evolutionary adaptation of a developmental mechanism. “Hopefully, with the identification of senescence in a normal setting in the embryo, this will allow us to identify new mediators and biomarkers of senescence in future studies” says Mekayla Storer, a PhD student in the CRG and first author on the study, adding that “these findings change the way we understood senescence in the past, and give us novel important information to tackle cancer and aging”.

The work performed by the researchers at the CRG was funded by the Spanish Ministry for Science and Education, the Centre for Genomic Regulation, and studentships from “La Caixa”.