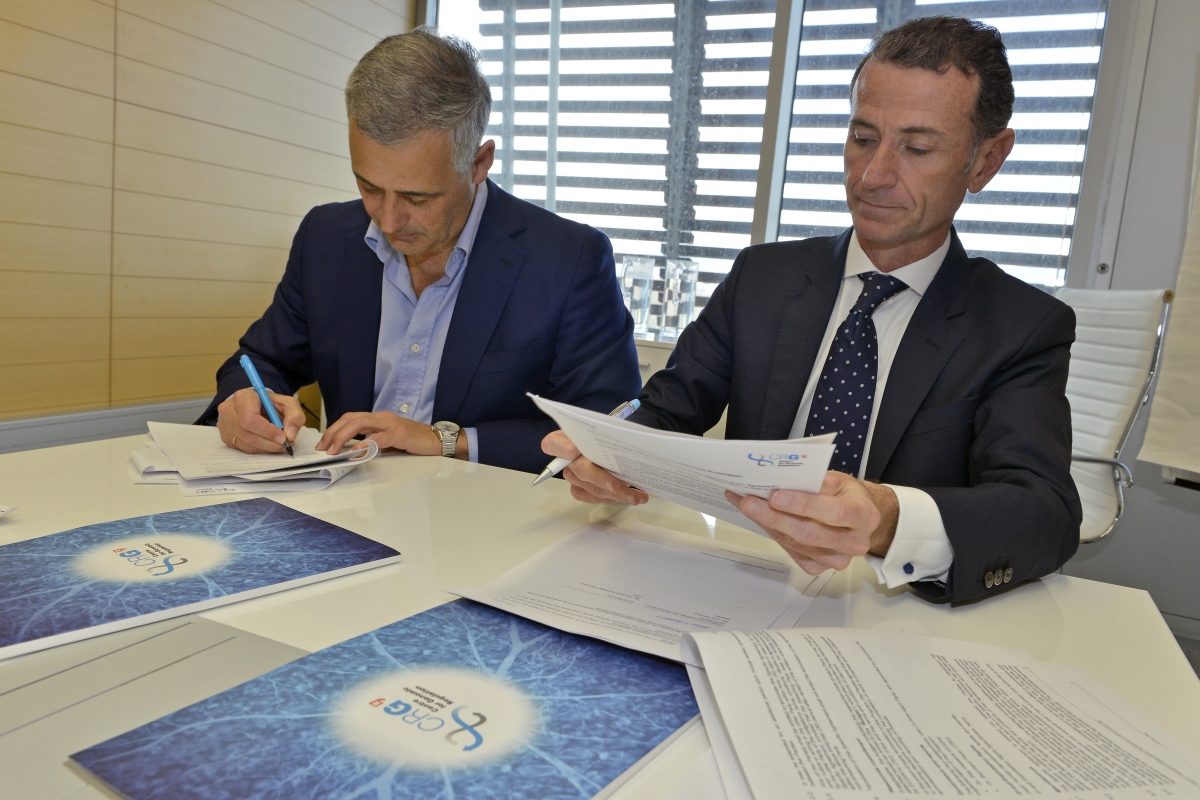 The framework agreement, signed by CRG Director Luis Serrano and Eugin Group CEO Eduardo González, consolidates a relationship already existing between the two centers, articulated in the working group of Isabelle Vernos, ICREA research professor at the CRG, with whom Eugin has been working for four years through an internal CRG initiative to promote interdisciplinary research geared to patients and society.

Following the success of this experience, cooperation efforts are now being distributed out to four working groups directed, on the CRG side, by Isabelle Vernos, Toni Gabaldón, Bernhard Payer, and Elvan Boke. Key members of the CRG staff, they will keep up a close relationship with Eugin's R&D team, directed by Dr. Rita Vassena, scientific director of the Eugin Group, and member of the Executive Committee of the European Society of Human Reproduction and Embryology. 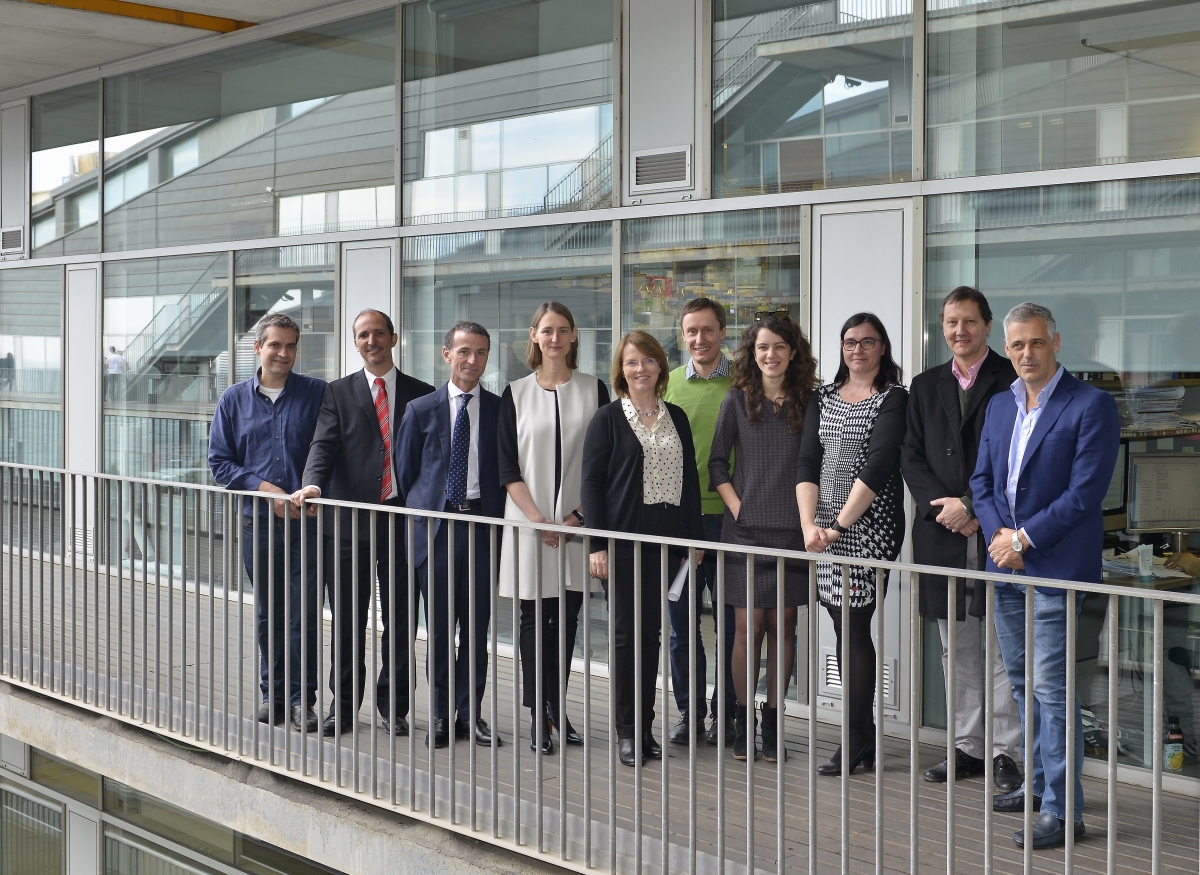 Most of the research generated by this agreement will focus on studying the quality of ovules and their aging over the years. Ovules "age" with the passage of time, and this is the fundamental reason why so many women cannot become pregnant by natural means. Higher childbearing ages have been a constant trend in Spain over recent years. According to the latest figures from Spain's National Statistics Institute (INE), the average age at which Spanish women have their first child is 32.5 years. In 1975, the year this statistic began to be recorded, the average age at which women had their first child was 25.2 years.

The CRG and Eugin research groups will work in different research areas. These range from studying how, as the ovule ages, there are modifications in the proteins that will later be responsible for the development of the embryo; to identifying if epigenetic changes have any effect on the ovule maturation process; and studying whether changes in the vaginal microbiota may have any effect at the time of embryonic implantation.

From lab bench to doctor's office

With this alliance, the CRG's research potential is united with Eugin group's longstanding experience in assisted reproduction and patient treatment. “The agreement will give Eugin access to one of most elite, groundbreaking centers not just in Europe, but the entire world, such as the CRG. The CRG will share with Eugin its knowledge, techniques and equipment, which are at the cutting edge of biomedical research," states Dr. Rita Vassena. “Being able to take the research outcomes that come from this agreement to daily clinical practice is very stimulating, both for the medical community and our patients. Assisted reproduction is still a very young field of medicine, and we hope to get results that will improve infertility treatments," she concludes.

As for the CRG, it will have access to the assisted reproduction knowledge base of one of the largest assisted reproduction groups of Europe, with thousands of patients around the world. “The cooperation between basic and clinical research, from the first stages of the research, is very positive, because it drives an interdisciplinary approach, and makes it possible for the knowledge we generate to benefit society," states Dr. Serrano, Director of the Centre for Genomic Regulation (CRG). “The four projects that we are now beginning are successful examples of this cooperation. They stimulate our scientists, who see that their research can have an application from a very initial stage," adds Serrano.

The Centre for Genomic Regulation (CRG) is an international biomedical research institute of excellence, whose mission is to discover and advance knowledge to the benefit of society, public health and economic prosperity.

At the CRG, we believe that the future of medicine depends on modern-day innovative science. This requires an interdisciplinary team focused on comprehending the complexity of life, from the genome to the cell, to a complete organism and its interaction with the environment, offering an integrated outlook on genetic diseases.

Its main objectives are to become a worldwide reference center in biomedical sciences, communicate and establish a bilateral dialog with society, offer advanced training to the next generation of scientists and turn new knowledge into benefits and value for the society and economy of this country. The combination of the know-how from top-tier scientists from around the world, and the availability of state-of-the-art equipment, make CRG a unique facility with high-level scientific production situated in an international context, while also featuring first-rate scientific-technical services for research.

With a career spanning 18 years, Eugin is a reference group of assisted reproduction centers at the Spanish and international level,  with clinics in Spain, Italy, Denmark, Colombia and Brazil. Within Spain, the group serves its patients from its clinics in Catalonia and Madrid, under the Eugin, CIRH and FecunMed trade names.

Since its official opening in 1999 in Barcelona, the group has treated thousands of patients around the world every year. In 2017, Eugin increased the figure to 24,000 treatments, making it one of the European leaders in its field. Today, the Eugin team is made up by more than 500 specialists, whose training is updated on an ongoing basis, to be able to provide personal, high-quality care.