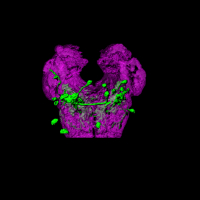 If a banana is rotting in the fruit basket of your kitchen, chances are that a fruit fly will find it long before you do. How is the nervous system of a tiny fly capable of ascending the odour trail created by a banana? This question has been addressed in a new study conducted by the Sensory Systems and Behaviour laboratory led by Matthieu Louis at the EMBL-CRG Systems Biology Unit of the CRG. The fruit fly Drosophila melanogaster is an excellent model system to explore how complex behaviours, such as chemotaxis, are controlled by the activity of neural circuits. Although the word neuroscience may evoke the human brain to most of us, research in smaller genetic model organisms often represents the most direct entry point into the molecular and cellular basis neural functions.

The research carried out by the Louis lab is a new example on how the combination of interdisciplinary tools permits to probe basic principles underlying complex biological processes. In this case, CRG scientists dive deep into the fruit fly neural circuits, which could be the entrance to more complex systems as the human brain.

To identify the neural circuits involved in chemotaxis, the team decided to concentrate on the fruit fly larva, which comprises 10,000 neurons — 10 times less than adult flies and 10 million times less than humans. In temerarious efforts, the team screened over 1,100 fly strains where the function of a small subset of neurons of the brain could be genetically turned off. “At the beginning of this project, we had the feeling to be looking for a needle in a haystack. We knew about the 21 olfactory neurons in the head of the larva and the motor neurons in the equivalent of spinal cord in the larva. In contrast, we had virtually no clue about the identity of the neurons in between, the synapses responsible for the processing of the olfactory information and its conversion into navigational decisions”, explains Matthieu Louis.

From this screen, the attention of the team was drawn onto a handful of neurons located in a region traditionally associated with reflexive taste behaviour. When the function of the identified neurons was silenced, larvae became unable to make accurate decision to navigate odour gradients. Using optogenetics, a method that exploits light to control and monitor neurons, Ibrahim Tastekin, one of the co-first authors of the work, was able to activate individual neurons. To his astonishment, he found that brief excitations were sufficient to trigger a change in orientation. “This was like magic: optogenetics gave us a means to remote control an elementary form of decision making. The fly genetic toolkit creates unprecedented possibilities to probe the function of individual neurons in a semi high-throughput manner. Here we proved the necessity and sufficiency of a couple of neurons to control a fundamental aspect of chemotaxis: the conversion of sensory information into behaviour.” The team went further by demonstrating that the neurons identified in this zone are involved in the processing of odour, light and temperature. “We are very excited to define how these neurons operate in concert with the rest of the circuitry in charge of chemotaxis,” says Matthieu Louis.

Beyond identifying which brain regions control individual feature of a behaviour of interest, the aim of the Louis lab is to understand how neurons form neural circuits, how circuits work together to achieve computations and how complex behaviours emerge from brain computations. In a paper recently published in Learning & Memory, the Louis lab focused on learned olfactory behaviour. Louis and colleagues had previously described the navigational algorithm that allows the larva to chemotax. Based on this model of the movement of larvae in response to chemical stimuli, the team has now described the impact of appetitive memory and learning on the navigational algorithm. This work explains how larvae become more efficient at locating the source of an odour that has been previously associated with a food reward.

Little is known about the neural circuits connecting the sensory neurons to the motor system. By adopting a systems neuroscience approach the Louis lab hopes to understand how a relatively small nervous system of 10,000 neurons represents and integrates changes in sensory signals to direct navigational decisions, and how learning affects the function of neural circuits. “By unravelling the computations achieved by single neurons in a numerically simple brain, we aim to advance our knowledge about similar functions in much bigger brains like ours. Our approach is complementary to studies in higher model organisms, including the Human Brain Project,” concludes Matthieu Louis.