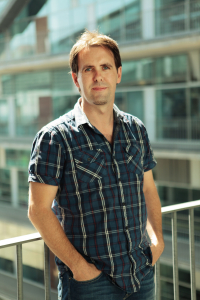 The City of Barcelona Awards 2013, given by the Institut de Cultura de Barcelona, have awarded, in the category of Life Sciences, the researcher Bill Keyes, from the Centre for Genomic Regulation (CRG), in Barcelona. The award ceremony will take place on February 11 in at the Saló de Cent, of the Barcelona City Council.

As noted by the jury, Bill Keyes was recognized "for his contribution in which, for the first time, it was observed that cellular senescence, a process that normally regulates aging and cancer, has a key role in embryonic development. Therefore, senescence in cancer is not just an aberrant process, but recapitulates a crucial natural mechanism in development." The members of the jury in this category were: Jaume Bertranpetit, Montserrat Vendrell, Joan Seoane, Patrick Aloy and Cèlia Marrassé .

Annually, the City Council opens a call for entries for the City of Barcelona Awards in order to recognize the creation, research and production of quality carried out in Barcelona by both individuals or groups who work there, and institutions or organizations that promote or produce this type of activities.

Bill Keyes leads the group of Mechanisms of Cancer and Aging at the CRG. He and his group are interested in understanding the common mechanisms that underlie the processes of cancer and aging, with a particular interest in the contribution of epithelial stem cells. His work aims to understand the mechanisms by which stem cells and cellular senescence are involved in both the processes of cancer and aging, and now also development.