Home > Appearances can be deceiving

Appearances can be deceiving

Appearances can be deceiving 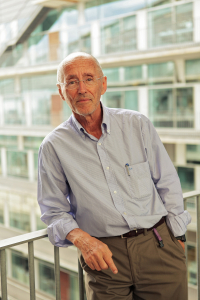 PRESS RELEASE
APPEARANCES CAN BE DECEIVING

CRG RESEARCHERS DISCOVER THAT A MOLECULE CONSIDERED TO BE A BREAST CANCER INDICATOR, ALSO HAS A PROTECTIVE FUNCTION

One of the main indicators for determining the activity of a tumour or cancer is cell division. Cancer cells divide more than other types and the genes and molecules involved in the process of division are, often, targets for identifying and treating certain types of cancer.
Researchers from the Centre for Genomic Regulation led by Miguel Beato have, in an article published in the journal Cell Reports, just revealed that one of these molecules (PLK1 kinase), up to now thought to be related to cancer, can also be crucial for the proper functioning of the cell.
PLK1 had always been associated with breast cancer due to its role in cell division. It is an enzyme that is very active during the cell cycle, in particular during the replication of genetic material and mitosis. That is why it is found in large amounts in cells affected by cancer. Now, Beato and his collaborators have observed that PLK1 also plays an important role in the regulation of genes activated during the resting stage and the initiation of division.
"What we have seen using genomics and proteomics techniques is that when PLK1 is expressed in the correct amounts it participates in the response to oestrogen and is needed to control and regulate the genes that stop cell division", explains Miguel Beato, head of the Chromatin and Gene Expression group at the Centre for Genomic Regulation. "Our work demonstrates that PKL is not always an indicator of poor prognosis. It is important that we learn to use this information and, when we design breast cancer treatments, take into account the fact that we need only reduce high levels of PLK1, which could be harmful, and try to maintain the physiological levels", he adds.
This work has been possible thanks to data on breast cancer patients and has been conducted entirely in the Centre for Genomic Regulation in Barcelona.
Reference article: Wierer et al., PLK1 Signaling in Breast Cancer Cells Cooperates with Estrogen Receptor-Dependent Gene Transcription, Cell Reports (2013), http://dx.doi.org/10.1016/j.celrep.2013.05.024
For further information and interviews: Laia Cendrós, Press Office - Centre for Genomic Regulation (CRG). Tel. + 34 93 316 02 37.