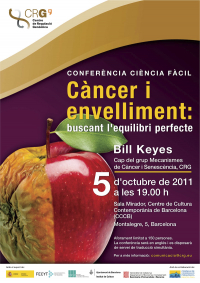 PRESS RELEASE
Barcelona, 28th September 2011
2nd EDITION OF THE “EASY SCIENCE” CONFERENCE SERIES
Next Wednesday October 5th, the Center for Genomic Regulation (CRG) inaugurates the second edition of the series of lectures for everyone. “Easy Science” Conference Series aims to get to know the research done at the center through lectures conducted by the researchers themselves.
The first lecture of this new edition will be held at the Centre for Contemporary Culture (CCCB) and everyone can participate. On one hand it seeks to explain in simple words the questions which are being already studied at the lab. On the other. In the other, it is also an initiative to talk about basic science to the public, to explain 0the many areas of research portrayed by scientists and its  fundamental role in the development of any country and economy.
The lectures are partially funded by Fundación Española para la Ciencia y la Tecnología (FECYT), the Spanish Ministry of Science and Innovation and Institute of Culture of Barcelona (ICUB).

FIRST LECTURE: Cancer and Aging: Getting the Balance Right

It is difficult to imagine that cancer and aging would have much in common. Aging is a normal biological process that happens to every living organism leading towards the end of life, whereas cancer is a terrible disease that strikes an unlucky few.

However, recent scientific research suggests that cancer and aging may in fact be quite related, and that at the biological level, they may in fact function in opposition. Whereas aging is caused by the decline in function of tissues and cells in the body, cancer arises from the uncontrolled proliferation and growth of cells. As to how this may happen, one idea is that it is our bodies natural defense mechanisms that may play a role. For example, our bodies have normal defense mechanisms designed to protect us from uncontrolled proliferation and cancer. But evidence now suggests that these same defense mechanisms may actually lead to aging.

In this seminar, the researcher from the Centre for Genomic Regulation, Bill Keyes, will discuss the concepts of how cancer and aging are related by similar mechanisms and some of the work he is doing at the CRG aimed at understanding how they are connected, trying to give a general scientific and non-clinical overview of both processes.

About the speaker
Bill Keyes is a specialist in the mechanisms that link the processes of cancer and senescence (the aging and loss of function of a cell) and the role played by gene regulation.
Bill Keyes earned his Ph.D. in Physiology from the University of Alberta, Canada, and worked for several years at the Cold Spring Harbour Laboratory identifying those genes involved in carcinogenic processes. In 2009 he came to the CRG as head of the research group in Cancer and Senescence Mechanisms, within the Differentiation and Cancer Programme.
Dowload the brochure and the poster here
FREE ADMISION, no registration needed.