Chromosomes and genes are non-randomly positioned in the cell nucleus and the vision of a dynamic and complex organization of the nucleus is replacing the classical view of genomes as linear sequences. Process compartmentalization and spatial location of genes is proposed to modulate the transcriptional output of the genomes. However, how the interplay between genome structure and gene regulation is established and maintained still has to be discovered. The aim of this project is to explore whether the genome three-dimensional (3D) structure acts as an information store that modulates transcription in response to external stimuli. In an interdisciplinary team effort, we study the conformation of the genome at various scales, from the nucleosome fiber to the distribution of chromosomes territories in the nuclear space. We generate high-resolution 3D models of the spatial organization of the genomes of distinct eukaryotic cell types in interphase to identify differences in the chromatin landscape. We notably follow the time course of structural changes in response to cues that affect gene expression either transiently or permanently: changes in genome structure during transient hormonal response of differentiated cells and stable trans-differentiation of B cells to macrophages. We are also establishing novel functional strategies, based on targeted and high throughput reporter assays, to assess the relevance of the spatial environment on gene regulation. Using modeling and computational approaches, we will integrate high-resolution data from chromosome interactions, super-resolution images and “omics” datasets. Our long-term plan is to bring to the front the view that the chromosome is a dynamic 3D fiber. To this end we will implement a 3D browser to map genomic features as they really localize in the nucleus, for a better characterizing how genome architecture dynamically integrates external signals to orchestrate gene expression. 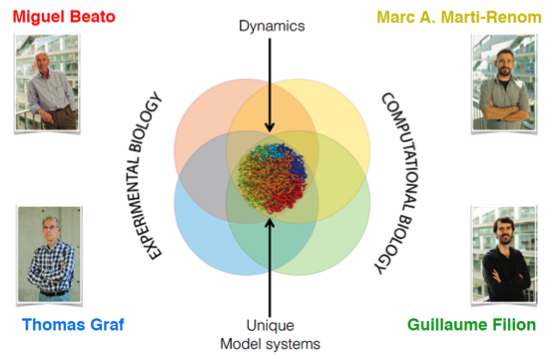