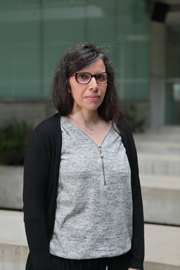 Precursor mRNA (pre-mRNA) splicing is the processing step in the gene expression pathway that involves the removal of intronic -and ligation of exonic- sequences to form mature RNAs (mRNAs). This process is catalysed by the spliceosome, composed of five small nuclear ribonucleoprotein complexes (snRNPs) and more than 200 proteins. snRNPs assemble on cis-acting elements (5’ and 3’ splice sites) to establish dynamic networks of RNA-protein, RNA-RNA and protein-protein interactions required for both of the transesterification steps of the splicing reaction.

Alternative splicing, a widespread mechanism contributing to proteome diversity (affecting more than 95% of the multiexonic genes), involves the differential processing of exonic and intronic fragments in the final transcript. While alternative splicing is important for normal development, its alterations have been linked to mis-regulation of cellular processes and to different human disorders.

I am focusing on deciphering the molecular mechanisms underlying splice site usage decisions and alternative splicing. More specifically, I am interested in: