Summary of Academic and Scientific Background

I am doctor in Biotecnology. I did my PhD at the IBB (www.ibb.uab.es) in Barcelona, in a lab of molecular biology and microbiology. During my thesis I worked with Mycoplasma genitalium, one of the smallest self-replicating organism. M. genitalium is a human pathogen that causes non-gonococcal urethritis. The objective of my thesis was the analysis of transcriptional regulation in this bacterium and cell division. For this propose, I developed novel genetic tools and I made two important breakthroughs that changed at that time, some pre-conceived notions in microbiology:

I went for a short stay (three months) at the group of Prof. Stülke’s lab (Göttingen; Germany), a specialist in Mycoplasma pneumoniae. My project was aimed at detecting antisense ncRNA in a related organism to M. genitalium. Unfortunately, we could not get the microarray technology working, and instead I worked on the characterization of metabolic mutants in this bacterium. In collaboration with Sebastian Schmidl, we showed that some metabolic enzymes could be key virulence factors.

In 2010, I started my post-doc in the lab of systems biolofy (CRG, Prof. Luis Serrano). Understanding a living system in a quantitative manner was an interesting topic for me. I thought that I could contribute with my knowledge in the biology of Mycoplasma and also moving from classical molecular biology to systems biology was a great challenge for me. As result of these last 6 years of collaborative work I have published more than 12 papers.

In 2014, I became staff scientist in Prof Serrano’s lab and I am in charge of the Mycoplasma team. When I became staff scientist, I had the opportunity to design and build entire projects and apply together with Prof. Serrano for international grants. As a result of this effort, two years ago we were awarded two European projects: (i) a large integrated project of 8 million Euros, MycoSynVac (I am co-coordinator) and (ii) an EraSynBio project, MiniCell (I could not officially be a co-coordinator due to the rules only allowing one person). With this money I have had the opportunity to re-organize the lab, establish new collaborations, contract new people and build a new team of motivated researchers.

Aside from grants I recently, together with J. Karr, co-organized the first (April 2016) and second (September 2017) international Whole-Cell model course in Europe (www.wholecell.org/school-2016/). The third edition will be hold in 2019 and it has been recognized as EMBO Workshop. In parallel, with the Systems Biology line of research, I also manage a team within the group that focuses on synthetic biology, having the goal of engineering M. pneumoniae to treat human lung diseases. In December 2016, I got my first grant as independent investigator, Miguel Servet. With this founding, we will be able to perform these in vivo assays to show that M. pneumoniae can be used as delivery system to treat lung diseases. In collaboration with Dr. Victoria Garrido and Prof Maria Jesús Grilló (CSIC) we have shown in vitro and in vivo that an engineered M. pneumoniae strain can be used as delivery system to secrete several proteins acting against biofilms formed by S. aureus. Also, in collaboration with the groups of Dr. Eduard Torrens (IBEC) and Dr. Antoni Torres (Hospital Clinic) we are doing the proof for medical application of MycoChassis to dissolve P. aureaginosa biofilms for treating Ventialator Associated Pneumonia (VAP).

I co-supervised B. Paetzold (a PhD student; thesis defended in 2013) when he was at the end of the second year of his thesis. This thesis was the first step in our group towards translational medicine and Synthetic Biology. Nowadays, Berni has his own biotech company (S-biomedics). I also became the co-supervisor of V. Llorens and Carolina Gallo from the beginning of their thesis. They defended it on the 15th of September 2016 and 11th of January 2018, respectively. Veronica Llorens got the extraordinary price to the best thesis by the UPF; this thesis comprised seven published papers and she is doing a post-doc at VIB. Currently, I am co-supervising the thesis of PhD students Daniel Shawn and Samuel Miravet. Through the supervision of these students, I have realized that I can do something much more important than only having ideas and publishing, and that is motivating brilliant minds to continue in science.

Finally, the Mycoplasma team, which I supervise, have developed the necessary tools for large scale-genome engineering of M. pneumoniae. 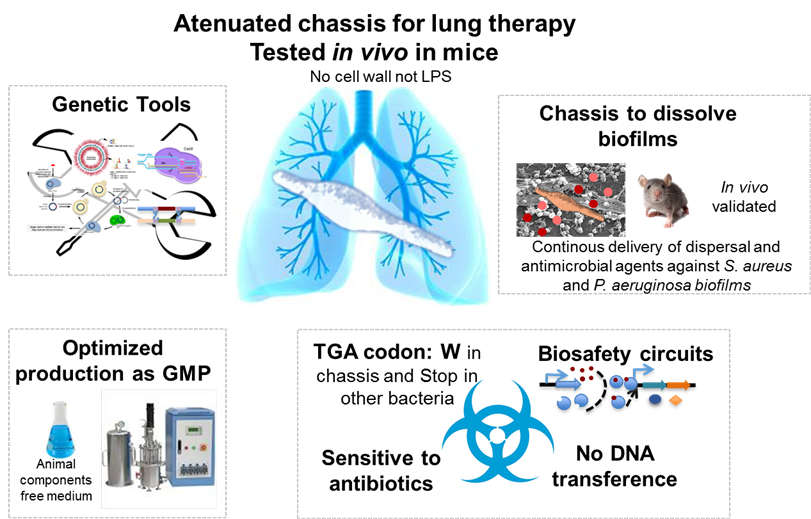 Synthetic biology promises to enable researchers to design therapeutically and industrially valuable organisms. Achieving this promise requires new techniques for designing, synthesizing, and transplanting entire genomes. Here, we propose to develop the first bacterial chassis capable of synthesizing and delivering organic molecules and proteins for human lung therapies in situ. Specifically, we will engineer the human lung pathogen M. pneumoniae, to construct a reduced, non-pathogenic chassis for human lung therapies and/or vaccinations. This project will involve intimate integration of systems and synthetic biology. We have recently identified the signals that promote proteins secretion in M. pneumoniae and also we have developed tools to do target deletions of pathogenic genes. Herein, we propose to combine both approaches to obtain a M. pneumoniae chassis that can dissolve biofilms formed by Pseudomonas aureaginosa and Staphylococcus aureus in Cystic Fibrosis patients. This chassis could be also extended to synthesize and deliver small molecules and/or protein therapies to diseased lungs in situ and treat other diseases like lung cancer.

The MycoSynVac project aims at using cutting-edge synthetic biology methods to engineer Mycoplasma pneumoniae as a universal chassis for vaccination. We will (1) modify existing methods of genome transplantation used for Mycoplasma species, (2) develop serum-free medium for scale-up in bioreactors and (3) analyze how to bring the product to market after efficacy of the vaccine has been shown in animal studies, ultimately to fight Mycoplasma infections in farm animals

Synthetic biology promises to enable researchers to design therapeutically and industrially valuable organisms. Achieving this promise requires new techniques for designing, synthesizing, and transplanting entire genomes. Here we propose to develop the first model-driven approach to synthetic biology, and use this approach to construct a bacterial chassis capable of synthesizing and delivering human lung therapies in situ. Specifically, we propose to develop a whole-cell model of the human lung pathogen M. pneumoniae, and use this model to design and construct a reduced, non-pathogenic chassis capable of delivering human lung therapies and/or vaccinations. This project will involve intimate integration of predictive modeling, genomic engineering, and systems and synthetic biology. Model predictions will provide direct input into genomic engineering, and the newly created strains will be characterized to refine the computational model. The project will produce the most accurate computational model of any organism to date, as well as produce the most reduced cell to date. In the future we anticipate this reduced chassis could be extended to synthesize and deliver small molecule and/or protein therapies to diseased lungs in situ.

Identification of small open reading frames (smORFs) encoding small proteins (≤100 amino acids; SEPs) is a contemporary challenge in the fields of genome annotation and protein discovery. Here, by combining a novel bioinformatics tool (RanSEPs) with “-omics” approaches, we were able to describe 109 bacterial small ORFomes. Predictions were validated and compared with other tools using proteomic datasets from different bacterial species, targeted proteomics, and SEPs validated in the literature. We found that up to 16% ± 9% of proteins in an organism could be classified as SEPs. Integration of RanSEPs predictions with transcriptomics data showed that some annotated non-coding RNAs could in fact encode for SEPs. A functional study of SEPs highlighted an enrichment in the membrane, translation, metabolism and nucleotide binding categories. Additionally, 9.7% of the SEPs include a N-terminus predicted signal peptide, indicating that they could participate in quorum sensing and/or signaling. This work represents the first comprehensive annotation of bacterial genomes and provides a tool to unmask the hidden universe of small bacterial proteins.